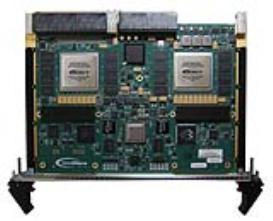 Designed for high-end applications, the Stratix V provides a high level of system integration and flexibility for I/O, routing, and processing.  The new S5-6U-VPX board, available from Sarsen Technology, provides a configurable 48-port multi-gigabit transceiver interface supporting a variety of protocols, including Serial RapidIO, PCI Express, and 10GigE.

Additional I/O interfaces include Ethernet, RS-232, JTAG, and LVDS. The board features up to 8 GB of DDR3 SDRAM as well as Flash memory for booting the FPGAs.  When combined with the optional BittWare Anemone FPGA co-processor and the ATLANTiS FrameWork FPGA development kit, the S56X creates a flexible, rugged and efficient solution for high-performance signal processing and data acquisition.

"The Stratix V is an extremely powerful FPGA, providing a tremendous amount of logic, memory, and multipliers, coupled with a large number of multi-gigabit transceivers," stated Ron Huizen, VP of Technology at BittWare. "Providing two of these FPGAs on a proven, fully-validated, VITA 65 OpenVPX COTS platform, with each Stratix V having access to a full FMC site for adaptable I/O and an Anemone co-processor for floating point, as well as the ARM for overall board control, makes for an extremely powerful board ready for deployment."