The case of the flying Megger meters!

Presss Release: Megger test equipment survived a rough landing when thrown from a car on the M62 motorway 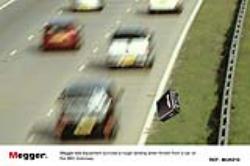 In a scene reminiscent of a James Bond movie, an aluminium flight case recently came flying from the window of a speeding van on the M69 motorway. Instead of the latest in espionage equipment, however, the case contained the latest in electrical testing technology, in the form of a Megger MTK302 electrical contractors’ test kit that had been stolen from a vehicle belonging to leading electrical training provider, G-TEC Training. Despite a rough landing at speeds close to 70 mph, the insulation, loop and RCCD testers that make up the kit were subsequently found to have survived their ordeal completely unscathed. A thorough check in the Megger calibration laboratory showed that none of the instruments needed even the slightest of adjustments! “We’d loaded the instruments into our van in preparation for driving to an on-site training course the next day,” said Griff Thomas, Managing Director of G-TEC Training, “but, during the night, someone decided to help themselves to everything in the van that was portable. They obviously didn’t realise the value of the Megger equipment, however, as they simply threw it out of the window of their vehicle while speeding along the motorway.” The Megger equipment was retrieved by the motorist following the van from which it was thrown, who had to swerve violently to avoid it. Advised by the police that they could do nothing to trace the owner of the equipment, the motorist was sufficiently interested and concerned to contact Megger. “Many people simply don’t bother to register their instruments with the manufacturer,” said Griff Thomas, “but this case shows one of the many reasons that taking a few minutes to complete the registration process is time very well spent. By looking up the serial numbers of the instruments in its registration database, Megger was able to identify us as their rightful owner.” Prior to returning the instruments to G-TEC Training, Megger carried out a complementary check on their functionality and calibration. The test report says it all – “Thrown from moving vehicle. No action required.” “We’ve relied on Megger instruments for many years,” said Griff Thomas, “and we’ve always recognised them as being tough and reliable. In this instance, however, I think it’s fair to say that they’ve performed well beyond the call of duty.” “And,” he continued, “Megger’s superb service was amply demonstrated by the company’s efforts in tracing us, checking our instruments and returning them to us, all at no cost! Buy Megger equipment in future? You can be sure we will!”