The importance of Photographic Evidence.

Storms – Good for business not so great for the stress levels!!! 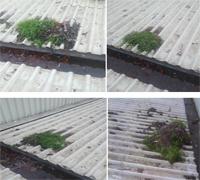 The storms have wreaked havoc across the UK in recent weeks and our phone has been ringing off the hook. We had 27 calls in one day from Lands’ End to John O’Groats!!  No sooner had we dispatched a team to help a client another one was ringing to attend to their problem. When I went to bed at night I closed my eyes with a vision of AA route planner firmly imbedded there!

It really bought it home to me how important maintaining the gutters are as some of the leaks could have been avoided had the gutters been cleaned regularly as several of the call outs were due to the gutters being full of debris and the sheer volume of water had overtopped into the building as it could not disperse down the outlets. As you can see from the photos it is pretty obvious that the water has nowhere to go.

This brings me onto the importance of photographic evidence. We always take before and after photos of the works we undertake so the client not only has physical proof of the work we have carried out it also shows the condition of their property.
Several times we have been asked to give a quote to re-line gutters as they had been advised by others that this is what was required. When we have surveyed the property we have been able to show the client that the condition of the gutters was not as problematic as they had been lead to believe, and expensive re-lining was not required. It was a case of re-sealing worn gutter joints.
W
e were recently called to a Retail Park by a new client as their existing contractor could not attend an emergency call out and there had been a huge flood in the store causing lots of damage. We were informed before attending that they didn’t think it was an issue with dirty gutters as they had recently been cleaned.

On inspection they were correct they had been cleaned but instead of removing the vegetation/debris from the roof as is standard practise it had been lifted out of the gutter and just left on the roof as the photos we took on arrival clearly shows the piles of ‘spoil’ sat at the side of the gutters.

This is how NOT to do a gutter clean as common sense would tell you that in heavy downpours the spoil heaps will be washed back into the gutters. We also found evidence that a lot of debris had been swept down the outlets which had caused the fall pipe to block up to the point where they had to be water jetted to disperse the compacted debris.

Had this new client been provided with photos after the company had attended they would have been able to question why the detritus had not been removed completely from the building. Clearly these photos will help this client seek recompense for the damage caused.