William Hughes will be celebrating the 10th anniversary of the opening of its factory in Bulgaria with an event being held at its manufacturing facility near Plovdiv. 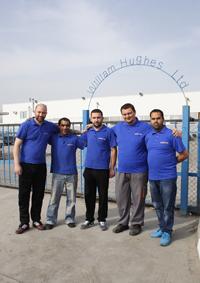 As well as inviting local Plovdiv dignitaries and all of the Bulgarian team, which now totals over 150 people, six lucky employees from William Hughes UK headquarters in Stalbridge, Dorset will be enjoying the day’s special events. The names of the six winners will be drawn from a hat and they will be flown out to Bulgaria to join in the celebrations which will be held in August.

“The success of our Bulgaria operation has exceeded all of our expectations,” said Emma Burgon, Engineering Director, William Hughes. “The 10th anniversary of the opening provides a great opportunity to celebrate this success and recognise the contribution made by our local people. In addition, involving some of our UK staff reinforces the relationships that have developed between our employees at both locations.”

In 2004, when William Hughes first opened the doors of its Bulgarian operations, there were just 13 employees and a 1000 m2 factory. Such has been the response that the factory has expanded four-fold to 4320 m2. But even this spectacular growth is failing to keep up with demand and a further 1000 m2 expansion is planned for 2015.

The success of the Bulgaria operation is built on the easy access it has provided to European customers that would otherwise have been difficult to reach. For example, changing manufacturing patterns across Europe have seen a growing demand from the developing local markets in Romania, Serbia and Turkey as well as traditional markets in the UK, Poland, France and Germany.

Flexibility of supply means that orders can be met either from Bulgaria or William Hughes Dorset factory depending on the type of product, available resources and the location of the customer.

As demand for products has grown, new machinery and processes have been installed in Bulgaria to supplement the UK manufacturing facility. These now include a total of 35 CNC wire bending machines, with two vertical injection moulding machines and two nylon plastic coating lines.

There are also seven robotic welding cells complemented by finishing processes that include an Electrophoretic black paint line and Delta Tone paint coating line. The new moulding machines enable products such as car seat frames, which have traditionally been clipped together, to be over-moulded providing an assembly that is both strong and fast to manufacture.

An example of a recent success for William Hughes Bulgaria is a contract worth ¾ million Euros for the manufacture of seat components for Johnson Controls.  The success was made possible because of William Hughes’ proven ability to design, engineer and manufacture to exacting standards and tight time schedules.

As Max Hughes, Managing Director, William Hughes concludes, “Establishing our first overseas production facility in Bulgaria has proven to be a key factor in the continued growth of our business. Bulgaria has not only grown its local operations year on year, it has also made a considerable contribution to our expanding UK operations. As a result we have advanced plans for significantly enlarging our UK manufacturing facility with the opening of a new factory at our base in Stalbridge later this year.”