Megger say Goodbye to their most Popular Product

The AVO Model 8 became the most popular professional multimeter in the market since its launch in 1951 but difficulty in obtaining the components has forced Megger to remove it from the market after 57 years of production. 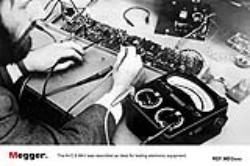 Launched to in 1951 the AVO Model 8 quickly became the most popular professional multimeter of the 20th Century but after 57 years the final Model 8 will leave Megger’s Dover factory in October, where it has been produced since its introduction.

Despite rising prices over the years, forced by the labour-intensive production methods needed to manufacture analogue instruments, demand for the AVO Model 8 has continued to this day, albeit at much reduced levels. The decision to discontinue this iconic product has, however, been forced by the lack of availability of the components needed for its production.

“This is, in some ways, a sad moment,” said Nick Hilditch of Megger, “but it has to be said that measurement technology has moved on a long way since the AVO 8 was designed. Our latest multimeters offer much more than the AVO 8 ever could and, of course, they’re much more competitively priced.”

“One thing hasn’t changed, however,” he continued. “When the AVO 8 was launched, we were at the forefront of developments in portable instrument technology, and today we still retain that position. Our development laboratories in Dover and the USA continue to come up with innovative instruments that satisfy our customers’ needs efficiently and cost effectively.”

The last production batch of the AVO Model 8 is currently available to be purchased.