The new TetraNex® grinding system replaces the familiar TriNex® version. With the optimized arrangement of TetraNex® and TetraNex®-Plus disks, the power output of the mill is increased by more than 30%. Since, in many cases, this also increases energy efficiency, the improvement in production capacity is often even greater. Thus, the specific energy requirement is reduced, productivity is increased, and production costs are considerably decreased. 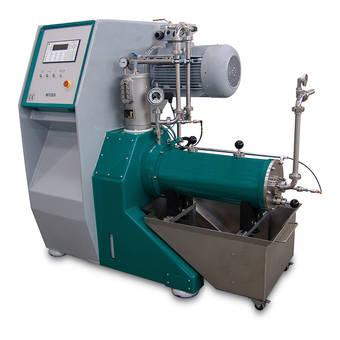 While the front of conventional grinding disks is smooth, TetraNex®-Plus disks have special activation elements, resulting in a positive effect on the movement of grinding media. Smooth disks create primarily stratification flow of grinding beads in the radial and tangential direction, whereby the beads rub against each other. In contrast, the front elements of TetraNex®-Plus disks activate the beads reciprocally in the axial direction. This leads to increased contact between the grinding beads and thus a more effective grinding process.
Cool Plus Package
The improved performance of the new grinding system as described above has been demonstrated many times over through extensive laboratory testing as well as practical applications. However, temperature limits often restrict increased power output during processing. In order to fully utilize performance potential, NETZSCH offers the Cool Plus package: a grinding chamber with a ceramic inner liner made of NETZSCH-Ceram C. The much higher thermal conductivity, as compared to steel, combined with an optimized cooling water supply line, facilitates maximum heat exchange between the product and the cooling water and thus a lower product temperature with the highest grinding performance.
Another advantage of the new liner material is the high degree of hardness; hence its higher wear-resistance. The combination of these two features provides the potential for a significant increase in the performance of existing mills; therefore, the investment in a retrofit is realized very quickly.
Proven in Practice
When an LME is converted to the LME Plus version, production bottlenecks are quickly remedied and potential new investments can be considered. This is confirmed by Mr. Katholing, Production Manager at the SW Color paint factory in Bindlach. Results of initial testing were positive. Production bottlenecks were resolved in one pass, and, for some products, the process was reduced from two to just one grinding cycle which is equivalent to doubling production performance. Since investment in new machines was not possible in the short term due to lack of space, it was quickly decided to convert several existing units to the new system.
In addition to converting existing systems over to the new version, NETZSCH offers a process analysis of grinding cycles. This helps to minimize inefficient operating conditions and identify opportunities for further increase in efficiency or reduction in costs.