Six budding make-up artists showed off their creative skills as they took part in the final of the fourth jane iredale National Student Make-up Competition, held on 26th June in the elegant surroundings of London’s Dorchester Hotel to coincide with a celebration of the brand’s 20th Anniversary. The finalists were selected from more than 150 entries received from beauty therapy and make-up students representing more than 60 colleges nationwide. 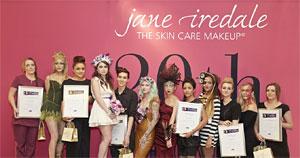 The competition was hosted by jane iredale distributor iiaa, whose College Programme supports and educates students, encouraging them to strive for the high standards that will help them to succeed in future roles in the industry. This year, the students were tasked with re-creating their own interpretation of their favourite music video at the live final, this time using jane iredale cosmetics exclusively, having undergone two days preparatory training at the iiaa’s London head office.

The winning entry came from Level 3 Theatrical Make-up student Joanna Davies of University College Birmingham, who was inspired by Freddie Mercury’s red eye shadow and flamboyant costume decorated with eyes and feathers in Queen’s ‘It’s A Hard Life’ video. Joanna won a £1000 make-up kit for herself and a £500 kit for her college, plus invaluable work experience.  Each finalist also won a further four-day training make-up course with iiaa.

Joanna said, “I’m in complete shock!  I would like to go on and teach the course I’ve been doing but first I’m going to go freelance in creative fashion and avant garde make-up and enjoy the opportunity that winning this competition will bring.”

Second runner-up Jenny Owen, also from the Birmingham college, used Robbie Williams Rock DJ video as her inspiration to craft an outstanding dual faced representation of both ‘muscle exposure’ and glamour. She cleverly created the pink and red shades that she needed by blending various lip and eye products.

Beauty journalist and TV make-up expert Sarah Jagger, commented:  “It was a hard decision to make because all the finalists created incredible work, however Joanna's work ticked every box for me, demonstrating talent, creativity, clear interpretation and a very impressive use of jane iredale products. Joanna had clearly designed her work with face and body paints yet managed to adapt the design using the range ingeniously.”