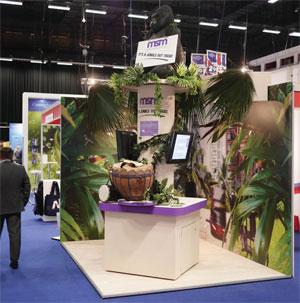 Last year we were brought in by the Olden Group to help with a new client’s first custom built stand at the Airmic Annual Conference in Liverpool. The company was MSM Risk Management, we designed a stand which helped them win the award for best small stand on their first outing!

After the great success of 2012, we were asked to look at a stand for this years show in Brighton, the pressure was on to repeat it. The Olden Group came up with a concept for this year.... a jungle theme!

We first thought of ‘get me out of here’ but went with ‘It’s a jungle out there’. The print to the walls were inspired by post apocalyptic movies like ‘12 Monkeys’, ‘I am Legend’ and after countless hours spent on Photoshop turning an image of the area around the Gherkin looked like a new greenbelt. It looked great!

We were able to reuse most of the elements used on last years corner feature. We just had to come up with an idea to replace last years giant Rubik’s Cube? We dismissed several landmark buildings and scoured the prop hire companies for ideas. Finally, we found something that was the answer to our prayer..... a life sized gorilla, made from fibreglass but looked real enough. That just left the final stand dressing, data capture and the competition to be addressed.

The stand dressing was quite straight forward, lots of jungle type silk plants to make the gorilla feel at home. The data capture was achieved by ‘Snake Lady’! (a young lady with her body painted as a snake) giving out invites, in the shape of a leaf, to the stand which were also the competition entries.

The prize was a helicopter flight over London. The visitor interactive device was ‘Jungle Drums’, a few bongo drums, one with a split skin that you put your had in to take out one of a number of wooden blocks with printed ‘talking points’ to discuss with the visitors.

"The exhibition was a success, in terms of traffic to the stand, number of leads and pipeline, and we won the best small stand award for the second year in a row!"
Clara Wood – Head of Marketing and Sales, MSM Risk Management Ltd

"After winning best stand in 2012, MSM really had a reputation to uphold and certainly achieved that this year. The stand, whilst small, stood out across the entire exhibition hall for its creativity and effective use of space. However, it was when we actually visited the stand and met the team that its jungle theming really made sense. I was particularly impressed by the “lucky dip” of discussion topics which ensured that delegates attracted by the gorilla would remain on the stand to learn more about MSM. Excellent!"
Georgina Oakes – Judge

"As the UK’s leading conference for the insurance and risk management industry we have seen a lot of creativity over the years. However, our 1000 delegates couldn’t have been more impressed by this stand, which, albeit a small space, was one of the most exciting we have seen."
Susi Ozkurt – Conference organiser

"We were confident that we had a strong visual impact. However, there was some stiff competition from bigger companies that have been doing this much longer than we have at this event, so to win this for two consecutive years was fantastic and rewarding for everyone involved!"
Caroline Bramwell – Managing Director of Dandelion Clock Exhibitions, Olden Group