Luxonic has just completed a ten-month programme and a £¾ million investment in expanding its production facilities in Basingstoke to allow for increase in demand for LED luminaires. 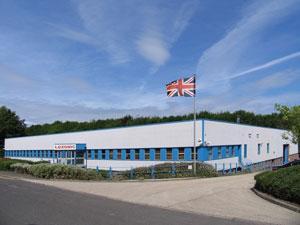 Luxonic has just completed a ten-month programme and a £¾ million investment in expanding its production facilities in Basingstoke to allow for increase in demand for LED luminaires.
Consolidating all the company’s manufacturing onto the Basingstoke site required an extensive re-organisation of the factory.  Engineering is at the heart of the factory and two mezzanine assembly areas have been installed increasing production area by 30%.  The introduction of a ‘Lean Manufacturing’ programme at Luxonic streamlines the manufacturing process, vastly improves efficiencies and motivates the assembly teams.  The Lean Manufacturing principle is to create production cells for each of the Luxonic product ranges where a team is now responsible for every aspect of that range’s production.
Virtually every Luxonic luminaire has been re-designed around LED technology from high bays to ceiling and wall fittings.
Luxonic has always prided itself in having full manufacturing facilities to produce the luminaires that it designs and develops.
The new investment now sees an additional Trumpf 3000 automated punching station and a Trumpf 85 tonne brake press respectively for the automatic pressing of steel luminaire body parts and the forming of luminaire metalwork.  For final finishing, a brand new custom built Ercon Finishing Systems powder coating paint plant has been installed.  With a continuous track length of 44 metres, it enables double hanging of products at an increased track speed, which increases output and improves energy efficiencies.
Luxonic Production Director, Alan Ayres explained, “The changes which we have put in place will give us a massive efficiency gain and more capacity to manufacture both LED and fluorescent luminaires”.
Nick Tavaré, Luxonic’s Managing Director added, “2013 was a fantastic year for us in terms of sales and we have seen huge increases in demand for our LED products.  This major investment puts us in an excellent position to satisfy this need for energy efficient LED lighting and grow the business in the future”.
Luxonic employs around 100 people of which half are engaged in production.  Now in its 28th year, and with annual sales this year of £11 million, Luxonic ranks as one of the largest British manufacturers of light fittings and control systems.  The company has very green credentials, considering the environment and sustainability in every way from design concepts and manufacturing techniques to energy efficiency of its products, delivery to customers and finally, recycling of product at end of life.  It is an holistic approach which leads to enormous carbon and energy savings.