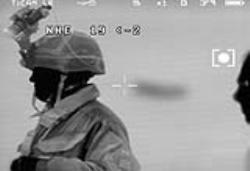 Thermoteknix are showcasing their ground-breaking ClipIR® which creates Fused Night Vision, TiCAM® 750 Thermal Imaging Binoculars and MicroCAM™ 2 range of ultra miniature, lightweight and very low power Thermal Camera Cores.
Mil Spec ClipIR® attaches onto Night Vision Image Intensifiers (I2) to combine thermal imaging with image intensification for fused night vision in low light and complete darkness.
Fused night vision technology is the new standard for civil and military operations, to give 24 hour operational capability. ClipIR’s unique 40° Field of View matches that of the I2 for maximum situational awareness in all conditions and is available with a range of brackets to fit most industry standard monocular and binocular Night Vision devices including PVS 7, PVS 14 and PVS 15.
TiCAM® 750 from Thermoteknix is the range of lightweight handheld devices for reconnaissance, border security, target acquisition, counter drug operations, police surveillance, force protection, and general situational awareness in the field. TiCAM will detect a man at over 2km.
British company Thermoteknix Systems Ltd is one of the world’s leading innovators and manufacturers of thermal imaging technology.
The AAD (Africa Aerospace & Defence) 2014 is taking place at AFB Waterkloof, Centurion, South Africa between 17 – 19 September 2014.
The LandForces 2014 is taking place in Brisbane, Australia between 22 – 25 September 2014.
Thermoteknix MIRICLE® & MicroCAM™ based products are not subject to US ITAR control but may require UK export licence depending on the end-user country and specification.
ClipIR® is not available for use or sale in the USA.