Wildlife through the lens: Thermoteknix cameras on loan to National Media Museum 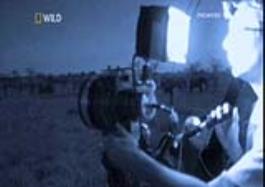 The exhibition gives visitors a unique opportunity to look behind the scenes of wildlife film production. It tells the story of what is needed to make the best videos and images of animals, birds and underwater creatures. The Nature, Camera, Action! Exhibition was created with the help of some of the most renowned camera operators and producers of British natural history programs as well as the contribution of the manufacturers of groundbreaking equipment used in wildlife film making today. Among the items on display are MIRICLE 307K thermal imaging cameras from a Cambridge-based company Thermoteknix.

The cameras have been used in making a number of wildlife productions commissioned by National Geographic Wild (HD) and filmed by Ammonite Films, an independent film production company. The co-operation between Thermoteknix and Ammonite first started with ‘Night of the Lion’ - never before seen footage of lions hunting in complete darkness which was made in Masai Mara National Reserve in Kenya. It was aired on Nat Geo Wild TV in September 2010. The Nightstalkers series followed with Crocodile Wars, Hyena Gangs, and Leopard Battleground films.

‘Miricle 307K thermal imagers are high resolution, miniature and very light cameras which produce highly detailed imagery required for the filming of wildlife in the dark. The exhibition currently run by the Museum is a very interesting and worthy project and we were happy to contribute when we were asked to loan the cameras for the display. – said Dr Richard Salisbury, Thermoteknix Managing Director.

The Nature, Camera, Action! Exhibition lasts till the 12th October. Thermoteknix Systems Ltd, is one of the world’s leading innovators and manufacturers of thermal imaging technology. The company is regularly involved in high profile projects including Formula 1 and Indycar racing, Aegis Ballistic Defense Tests and NASA’s successful LCROSS mission to search for the presence of water on the moon. The National Media Museum, located in Bradford, West Yorkshire, houses a collection of 3.5 million items of historical significance. The Museum also features traditional and interactive galleries and cinemas and organizes 2 film festivals and other events and activities throughout the year.