A Scottish primary school has upgraded its heating system and given its facilities a new lease of life thanks to ThermaSkirt heated skirting board from Discrete Heat. 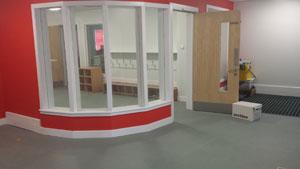 A Scottish primary school has upgraded its heating system and given its facilities a new lease of life thanks to ThermaSkirt heated skirting board from Discrete Heat. The radiant baseboard was specified as part of an expansion and refurbishment project at Tower Bank Primary, Edinburgh.
Due to an increase in demand the primary school had an additional three-story classroom complex built and relocated the existing nursery to accommodate the extra pupils. After finding the old heating system to be antiquated and inefficient ThermaSkirt was called upon to heat the new extension, nursery and toilet block, providing an all round comfortable and safe heat, similar to that of under floor heating.
Tower Bank Primary occupies a Victorian building that comprises an old and delicate single pipe heating system served by gas condensing boilers. This inefficient system could not be extended for use in the new parts of the school so an alternative heating system was required.
Planners were presented with a number of restrictions when choosing the heating system due to the design layout of the new classrooms. The nursery and a ground floor classroom have direct access to the playground via sliding doors, which automatically limits the amount of wall space available. This combined with the window areas being maximised to ensure a sufficient daylight factor due to the orientation of the building, further reduced space in which to mount heat emitters.
Another considerable factor was that regulations require the nursery to be supplied with low surface temperature heating while the classrooms can receive the normal temperature as provided by the gas condensing boiler that serves the existing school buildings.  Unlike other heating systems, ThermaSkirt can be run at high and low temperatures with a response time to match conventional radiators enabling it to cope with the fluctuating heating demands of a school.
Traditional radiators were concluded to not be a viable option, as the limited space would cause the heat to be concentrated in the one area directly around the radiator. After a demonstration to the in-house mechanical consultant, ThermaSkirt was specified for its ability to fit into the tight space under the window and provide an even distribution of heat across the room while not taking up any usable space so total flexibility for classroom layout is allowed.
ThermaSkirt heated skirting boards produce a heating pattern similar to that of under floor heating but does not entail the same extensive installation work and instead is an easy retrofit for a wide range of property types. Having been independently tested for its level of energy efficiency compared to conventional radiators, ThermaSkirt was found to have a 50% higher heat transfer ability while reducing bills significantly thanks to its naturally lower running temperature.
ThermaSkirt’s profile is identical to that of a skirting board allowing ThermaSkirt to be wiped clean at the same time as the floors are mopped and with no exposed pipes or protrusions it is free of trip hazards making it the obvious choice for creating a safe environment for children.