A brand new £1.2 million tennis centre has been opened in Portsmouth and is the first of its kind to benefit from LED lighting, all of which has been provided by Luxonic. 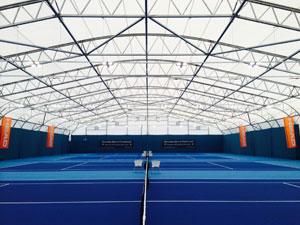 Former British number one, Greg Rusedski and council dignitaries opened the complex, which is situated next to the Mountbatten Sports Centre.
It is the first Lawn Tennis Association ( LTA ) funded and approved project that uses a full LED lighting scheme to create an optimal environment for recreational use while reducing energy consumption.
Portsmouth city council secured  £834,387 in funding from the LTA while providing the remaining £332,824 from council funds. The new centre comprises four full sized indoor courts and six outdoor courts while the youngest of tennis fans can enjoy eight new mini courts inside. The Lord Mayor of Portsmouth was present at the unveiling while tennis ace Rusedski gave tennis enthusiasts some professional advice and coaching.
Luxonic’s HI-MAX LED was installed in the sports hall, a range of luminaires designed for mounting at heights of up to 18 metres in large open areas. High power OSRAM LEDs allow the light fitting to work at increased heights while the options of either surface or suspended mounting allow the scheme to be easily incorporated into existing ceiling systems. The life expectancy of the luminaire is significantly increased by the protection of the LED array by optics, which also reduces maintenance cost in both time and replacement fittings.
The HI-MAX LED’s energy efficiency is furthered by the option of adopting the DALI control system that enables the luminaire to react to changes in natural light levels and adjust the LED’s output appropriately so that the necessary light levels are maintained. The use of DALI controls can also program the lights to turn off automatically after the infrared motion detectors register a certain period of inactivity. The flexibility of the HI-MAX luminaire system means it is suited to individual preferences of the user while cutting energy costs and minimising the environmental impact the centre has by effectively eliminating electricity wastage.
Jo Dallas, centre manager at the new complex, commented, “We were looking for an efficient lighting system. It is great the way the lighting reacts to the brightness outside and adjusts its lux levels accordingly. The system is very easy to use and there are various ways the lights can be set according to your needs and the LEDs have certainly been cost effective, which has been seen in our energy bills. I would certainly recommend similar lighting to other facilities”.