A variety of brand new luminaires are to make their debut at LuxLive 2014 from Luxonic Lighting. 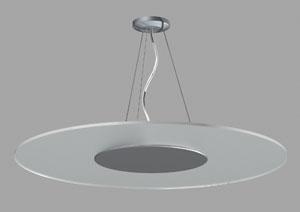 Setting the scene is Luxonic’s Skylux® pendant, a new decorative architectural fitting suspended from ceilings and presenting an horizontal disc of edge lit acrylic powered by LEDs.  Also designed for office interiors are the new direct/indirect versions of Luxonic’s successful Slimlux® and Skylux® LED luminaires.  Both designed for suspension mounting and using LEDs of 4,000k Ra80 the Skylux’s larger dimensions produces 2900 lumens and Slimlux® is just 66mm wide and it produces 1590 lumens.
Two new products to hit the industrial scene from Luxonic are the new Hi-Max® LED and its Aislelux ® luminaires.  The Hi-Max® LED is a very high efficiency, 130 luminaire lumens per circuit Watt, diecast hi-bay luminaire designed for all high level open area industrial applications.  It comes in a range of outputs from 8,000 to 34,000 lumens and may be wirelessly controlled.  The Aislelux® LED is available as a 1200mm or 2400mm luminaire specially designed for lighting racking areas and can be mounted up to 18 metres high.  It too, can also be wirelessly controlled.
One of the innovations from Luxonic this year is its Multilux modular LED light blocks.  For the first time, ceiling luminaires can be produced using the 36mm square blocks, affording an enormous amount of creativity in the look and shape of ceiling luminaires.  They are sure to be popular amongst architects and interior designers and they are high performance producing over 100 luminaire lumens per circuit Watt.
Completing the line-up of the new luminaires at the show will be colour temperature changing versions of Luxonic’s V-LED® 200 downlighters.  Here, new controls allow the fittings to be programmable to set colours from warm 2700k all the way through to 6500k colour temperatures.
Other products featuring on the Luxonic stand will be Luxonic’s popular Linearlux®, MLO, Teardrop®, and a new range of luminaires for the SAS Tubeline system.
Luxonic Lighting can be found on stand H20 at LuxLive ’14 on 19th & 20th November.