One of Britain’s Brightest Businesses 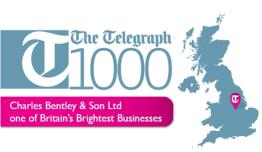 Charles Bentley and Son Ltd named as one of Britain's Brightest Businesses. The Telegraph published a report to celebrate 1,000 mid-sized companies which have weathered the economic storm and are set to be the foundation of the UK's recovery.

Concerns over the health of the economy disguise the fact that thousands of businesses across the UK, such as Charles Bentley and Son Ltd, are growing and generating jobs.

The snapshot focuses on companies and partnerships with sales between £5m and £500m. Many are growing quickly, others are doing so more slowly, often sustained over many years. It means young gazelles sit alongside long-established companies that have found new ways to grow.