A TEMPORARY complex is set to provide high-tech facilities for students during work on a new £40 million sports centre. 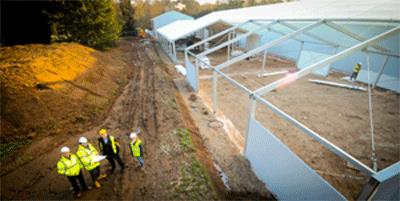 The University of Nottingham is transforming existing facilities into a state-of-the-art venue three times its current size.
And temporary building experts Spaciotempo are providing an interim solution while the building work, expected to last two years, is carried out.

The £2 million project, which involves the erection of more than 3,000 square metres of bespoke structures at the University Park campus, represents the company’s biggest value single contract to date.
But Scott Jameson, managing director of Spaciotempo, is fully confident that the innovative complex will be up and running next month.

He said: “We’re managing the entire project, which involves a lot of ground work and the installation of several sports buildings.
“We’re putting in all the drainage and providing the framework, flooring and electrical equipment including the heating and fixtures and fittings.
“It’s a big task, but we have plenty of experience and expertise and we’re well on track to meet our target of completion by March.”
The temporary buildings will be used to replicate the existing facilities and will feature a 12-court sports hall along with a gym.

It is being been part-funded by alumnus David Ross and will be named in his honour, but the University has an ongoing appeal to raise an extra £3 million for equipment, coaches and scholarships.

The new centre will feature a 200-station fitness suite, a 60-metre indoor sprint track, adjoining 20-court sports hall and an advanced sports performance clinic. There will also be one of only four all-glass squash courts in the country.
Dan Tilley, director of sport at the University of Nottingham, said: “The temporary buildings represent the first stage in what is a huge project for us and I’m sure they’ll provide a sound interim solution.

“Spaciotempo offered the solution that was closest to our brief and showed a positive, flexible attitude.
“They are also providing an all-encompassing service, which is a massive bonus for us.
“It meant we were able to delegate the entire project to them and will simply take delivery of the keys next month.”