iiaa, distributor of jane iredale THE SKIN CARE MAKEUP® in the UK and Ireland, has been named Distributor of the Year 2014 by Iredale Mineral Cosmetics. The award is made to the most successful international distributor of the past year, against stiff competition from more than 40 others around the globe. 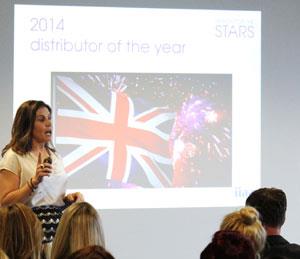 Theresa Robison, Senior Vice President, Global Sales & Business Development at Iredale Mineral Cosmetics, announced the news on a recent visit to the UK, praising the team for its outstanding success in the area of sales and the vision and integrity with which the company represents the brand.

“I had the distinct honour of travelling to London to share the news with the iiaa team that they were our Distributor of the Year for 2014,” said Theresa.

“It was such a pleasure to spend time with David Alpert and his talented team, and to personally thank them for their hard work and dedication to the jane iredale brand. Their accomplishments in 2014 were truly amazing. The bar has been set very high, and I look forward to their continued success in 2015.”