Female talent is to be celebrated as Angelic Music launches “In Her Own Words,” the highly anticipated hunt for the female singer/ song writer of 2008. 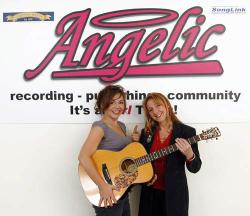 Angelic Music record label for female singers and songwriters launched the competition’ In Her Own Words’ as a pioneer for regaining artist credibility; a pledge to rediscovering real music talent unaffected by the stereotypical, generic pop image.

This year’s entrants will be following in the footsteps of 2006 winner Rosie Oddie (daughter of TV presenter Bill Oddie) who fought off competition from around the world to be awarded the song of the year with ‘Genni’s Song.’

Since winning, Rosie has signed a deal with one of the Uk’s top agencies, Primary Talent and is in talks with major record labels. Her performances have included the 02 festival in Hyde Park and as support act to legendary band “The Blockheads” on their 30th anniversary tour.

“Real music fans first and foremost want great music and are less interested in image than the mainstream industry claims”.

The 2008 lucky winner will receive a fantastic prize package including a day’s production and recording in the world class studios P&C Music in West London with producer Stuart Anning. The winner will receive one year’s free membership to SongLink International and their winning track will be distributed across Europe and the UK on a Songlink International Compilation CD. As if that wasn’t enough the songwriter will become the proud owner of a brand new Blueridge guitar to the value of £500.00 and will be included in a ‘Winners’ CD with the other finalists. The experts deciding the fate of the hopeful entrants this year are Megg Nichol, a successful songwriter and trustee of the British Academy’s Composer & Songwriters, Kerry Harvey-Piper, co-founder of the award winning Red Grape Records label, Janis Haves, founder of Angelic Music, David Stark, the editor and publisher of SongLink International and Sir Harry Cowell, music maestro extraordinaire.

To enter the competition, entrants must be over 15 years of age and submit their song before the 19th January 2009. Entrants may submit as many songs as they like at £15 per song. 10% of all money received will be donated to the UK charity ‘Breast Cancer Haven.’ More information can be found on thier website www.angelicalmusic.co.uk.