Simdean Envirotec have installed an odour control system at one of the UK’s most advanced anaerobic digestion plants in Dungannon, Northern Ireland. 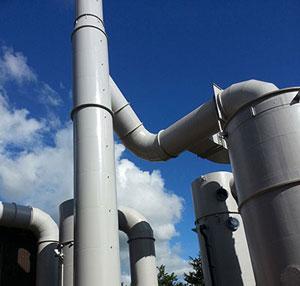 The plant, built by B9 Energy and Granville Eco-Parks, offers a clean and renewable form of producing energy. The process takes organic plant and animal materials (including food waste) and digests them using naturally-occurring organisms. It then releases biogas that can then be used to generate renewable power. Left over digestate can also be used as a fertiliser.

The Dungannon facility can process 50,000 tonnes of organic material a year and is one of the most advanced systems of its kind in the UK.

The Simdean system comprises an ammonia scrubber, a hypo scrubber (to remove H2S and sulphonated compounds), duty and standby exhaust fans and an adsorber with a free-standing 35m stack. The system’s volume flowrate is 60,000 m3/h.