WFL Millturn Technologies is a world leader in heavy duty mill-turn technology based on large slantbed lathes, producing standard models that have part turning and between centres capacities of 1,560 by 8,000 mm. Kyal Machine Tools (01780 765965) is the UK agent. 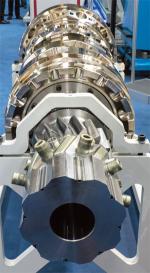 The Linz, Austria-based machine tool maker attracted around 1,000 visitors to its March event that was an occasion for highlighting on-machine capabilities and developments, rather than, bar one, new machine launches.

These days it seems that world-leading metalcutting machine tool makers are looking at ways to add material via powderbased laser additive manufacturing (AM), not just cut it, and WFL has joined that select club. But, as befits a company that offers a milling spindle on its machines that can deliver 58 kW of power, its AM capability similarly pushes the limits, seeing a 10 kW laser source fitted.

ADDING TO AM CAPABILITY
With other metalcutting machine tool makers offering laser-based AM systems of up to 2 kW, it is clear that WFL is supporting its credentials in powerful machining with equally commanding laser capability. And because of this, its machines also support laser-based hardening and welding/cladding (additive manufacturing of another sort, of course).

At the technology Open House, the company demonstrated this latest technology in combination with its 1,000 mm turning diameter capacity M80 model. The machine shown had a centre distance of 4.5 m (6 m is the standard maximum for the M80) and was fitted with a 10 kW laser source from German company Laserline GmbH (UK agent, Laserlines, 01295 672500).

On the powder-based material AM front, this means it is possible to lay down up to 25 kg of material each hour, while metals such as titanium and Inconel can be easily handled, it is stressed. But, as Christian Jagersberger, WFL’s regional sales manager UK, says, the AM process is still under development, with issues such as cooling the part an area of particular focus.

An exhibited demonstration component highlighted all the possibilities that this laser source could support – the production of angled spigots on a diameter via powderbased AM (and their subsequent machining), laser hardening of gear teeth surfaces, cladding via welding-based AM, plus the welding of inserts into the main component body (picture, left).

Says Jagersberger: “There is a demand for this type of capability, particularly in gear manufacturing, where there is wear on the teeth [cladding by welding], while [powderbased] AM also allows us to do things that weren’t possible before. AM is also useful for one-off development parts and avoids the need for castings or for the machining away of large amounts of material to produce features.”

Kyal Machine Tools’ managing director, Simon Pollard, echoes this: “AM can be used in research and development to support the manufacture of test pieces that are not of a standard shape, allowing them to be produced more quickly, more effectively and at a lower cost for test purposes.” The repair of down-hole oil tools via weld cladding is another application for this machine’s capabilities, he adds. Certainly, he believes that customers in the UK would be interested in this new development – aerospace and the oil and gas sectors are WFL strongholds in the UK.

Turning to surface treatment and a new development very much of interest to the aerospace sector is machine hammer
peening, using a special tool. This was demonstrated on a 520 mm turning diameter capacity WFL M35 with 2,000 mm centre distance. (The mill-turn application of this process is patented.)

The exhibition part was a 200 mm diameter by 100 mm long stainless steel part having an undulating curved end surface whose ridges and valleys radiated outwards from a central flat area. Other applications would be landing gear parts, at the intersection of the main body and struts or spigots that join it or protrude from it.

Surface finish figures quoted for before and after the process were given for both rough turning and milling. For the former, a figure of 3.060 micron Ra became 0.137 micron Ra, while for the latter a figure of 1.185 micron Ra was improved to a finish of 0.186 micron Ra. Apart from improved surface finish, the advantages, explains Jagersberger, are improved surface hardness and the creation of beneficial compressive stress. Kyal’s Pollard highlights that reduced hand-finishing of parts is a benefit that additionally delivers a more stable process. There is already UK interest, he adds.

GEAR MACHINING
Gear machining on shafts was a further highlight, in particular the application of the WFL gear machining cycles that offer easy programming solutions for several gear applications. For example, Sandvik Coromant’s InvoMilling that combines a standard cutting tool and special WFL cycles to generate different gear forms with a single cutter, avoiding the need for dedicated hobs.

One gear produced was a 27-tooth module 4 helical spur and another was a 22-tooth module 5 spur form. WFL currently has sole rights to the turn-mill application of this process. Normally shown on its larger machines, M65, M100 and M120, it was the first time showing on the 520 mm turning diameter M40, in this case the 3,000 mm centre distance model. The material was 42CrMo4 and the part dimensions were 120 mm diameter by 200 mm length. InvoMilling also featured on the M80 laser additive manufacturing machine – gear flank hardening thus being supported.

Outside of the InvoMilling process on the M40, the machine demonstrated WFL’s socalled Flanx milling technology creating a herringbone gear form (end-mill-produced 12-tooth module 7.2 form) plus a helical spur (22-tooth module 4), as well as gear generation by hobbing (42-tooth module 2.82 in six adjacent locations) and shaping (48-tooth module 2). These other gear forms are supported by WFL’s own CNC cycles. And the company already has machines in the field that are producing class 4 gears, underlines Pollard.

Grinding on a mill-turn is also possible, with an aerospace engine shaft the demonstration part set up on an 830 mm turning diameter M65. The subject steel part was 282 mm diameter by 1,234 mm length. Grinding with CBN or carborundum wheels is supported, with wheels handled by the toolchanger in the normal fashion. Such a machine would additionally feature special coolant filtration, double-skin guarding and positive air pressure to keep dust out of machine vital areas.

At an ergonomic level, LED machine lighting was displayed integrated within the working area, also the doors, and on the milling/turning B-axis head to highlight the cutter. Machine status lights are also offered, with status programmable by the customer, if other than the standard red, amber, green is required. Demonstrated on a 670 mm turning diameter M50 model supporting a threading demo (see extended article), implementing all LED options boosts brightness by 700% – the Lux level is 2,000 (typical figures would be 300-400).