Letchworth Sports and Tennis Club in Hertfordshire, was first formed in 1906, to support tennis in Letchworth. In May 2005 the club moved to its current venue and has grown in stature from a small club run by its members, to a limited company supporting a wide reaching audience and now offering a range of racket sports as well as a gym, studio, bar and shop. 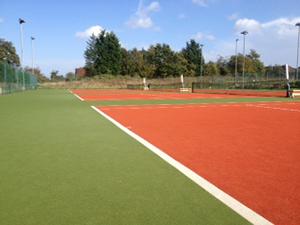 Playrite’s association with Letchworth Tennis club, although not from the very beginning has been longstanding and an integral part of the clubs journey to where it is now.

Playrite’s Matchplay 2 surface, was installed originally at the first incarnation of Letchworth Tennis club and was also the first surface to make it down at the current Letchworth Site.

After almost a decade of maintenance free (not recommended) use, the management at the club decided to once again choose a Playrite surface and our Matchplay 2 surface still holds true for the clubs use Matchplay 2 is an excellent high performance and durable tennis surface. The built in cushion layer makes for medium-paced play and is easy on player’s leg joints. High level porosity, low maintenance and all weather usage are an added value, which in return maximises playing time and increases potential revenue.

These courts are both striking and offer maximum play-ability, which to a club with over 1000 members is key to retaining and attracting members.

Playrite are proud to have a longstanding relationship with such as great club, and long may this continue.