Six finalists, chosen from more than 200 entries received from beauty colleges around the UK and Ireland, took part in the live final of the 6th annual jane iredale National Student Make-up Competition in London this week. Each was challenged to recreate their interpretation of this year’s theme, Rainforest Runway, in front of a panel of expert judges, using the brand’s mineral based colour cosmetics. 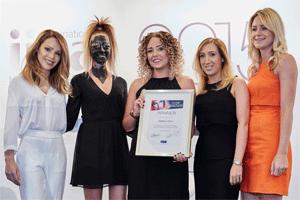 Their inspirations ranged from colourful tree frogs to tribal warriors, but what impressed the judges most was winner Stephanie Easton’s original portrayal of the rainforest at nightfall.  Stephanie, a level 2 Beauty Therapy student from Fife College, Scotland, won a £1000 make-up kit for herself and a £1,000 kit for her college, plus invaluable work experience.  Each finalist also won a further four-day training make-up course with iiaa.

The expert judging panel, including Strictly Come Dancing’s BAFTA nominated make-up artist Lisa Armstrong and Professional Beauty Make-up Specialist of the Year 2015 Tamara Tott, scored each entry on interpretation of the theme, use of advanced techniques and overall look.

“Winning this award has given me recognition as an up and coming make-up artist and is such an amazing way to kick start my career,” said Stephanie. “I’m so thankful to the iiaa for the fantastic opportunity and experience and I feel really proud that so many people have appreciated my work.”

Judge Tamara commented:  “Stephanie's look was different from the others and caught my eye from the beginning. A night jungle with an animal peeking through the jungle greenery, the eyes and moon light on the skin ... Everything about the look was well thought through and well performed.”

The first runner up was NVQ level 2 Beauty Therapy & Make-up student Veronika Holomanova from Bedford College, who created a shimmery reptile finish based on the snakes and colourful leaves of the jungle.  The second runner up was Forth Valley College’s Nadine Grant, developed a bold geometric design inspired by the tribal warriors and colourful parrots within the rainforest. The other fantastic finalists were Lauren Davison and Jessica Hamilton-Moore, both from Hartlepool College and Stephanie Bowring from Leicester College.

The competition, filmed for a video*,  was hosted at The Savoy by jane iredale distributor iiaa, whose College Programme supports and educates students, encouraging them to strive for the high standards that will help them to succeed in future roles in the industry.  Burns charity campaigner and TV presenter Katie Piper announced the winners at the event, which ran alongside the iiaa’s annual Salon of the Year awards.