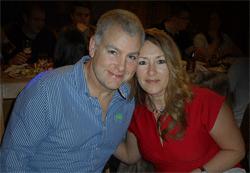 Debbie said: "I'm delighted and proud that our work has been recognised in this way. This isn't just about me - it's a reflection of the hard work and innovation of everybody at Heald."
East Yorkshire-based Heald Ltd has been providing some of the world's most high profile sites with advanced protection against hostile vehicle attacks since 1986.

The Hornsea company are world class innovators in the field of perimeter security technology and the largest manufacturer of quality security equipment in the UK. Its bollards, roadblockers and barriers have revolutionised the field of Hostile Vehicle Mitigation (HVM).

The Women in Business Awards, sponsored by HSBC, are regarded as the premier forum for recognising and rewarding talented businesswomen across the UK.

Forward Ladies managing director Griselda Togobo, who announced the four regional shortlists, said she expected one of the most closely run finals in the event's six-year history.
"The calibre of entries has been increasing year on year, but this year we have a number of outstanding entries, which have attracted women from all ages, all professions and all walks of life," she said.

The Yorkshire and North East winners will be announced at a regional awards ceremony at the Crowne Plaza hotel in Newcastle on 29 September.

The regional winners will then go on to compete in the national awards which will be announced at a glittering final on 20 November at the Queens Hotel in Leeds.

Karen Boswell, managing director of Hitachi Rail and chair of the judging panel, added: “The standard of entries for this year’s Women in Business Awards was outstanding which made selecting the shortlist extremely difficult.
"This is a testament to the high quality of our female business leaders across the regions who are helping the region’s economy grow."