The right test equipment from Megger helped to keep the Western Locomotive a safe ride. 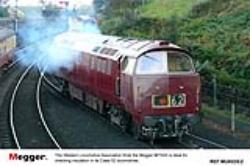 The Western Locomotive Association (WLA), which has its home at the Bridgenorth headquarters of the Severn Valley Railway, is finding a Megger MIT420 insulation and continuity tester to be the ideal tool for checking the condition of the electrical equipment in its two Class 52 diesel-hydraulic locomotives – D1013 Western Ranger and D1062 Western Courier.

Built in the 1960s and finally retired by British Rail in 1977, Class 52 locomotives with their unusual diesel-hydraulic transmission, are recognised as an important milestone in locomotive development. They have a strong following among enthusiasts, and the WLA is dedicated to keeping their own examples in full operational order.

In ageing electrical equipment, however, insulation deterioration is inevitable. The situation is particularly severe with preserved locomotives as their relatively intermittent use means that the equipment is rarely warm enough to disperse condensation and moisture.

For these reasons, the WLA’s engineers need to perform insulation tests on a regular basis, a task that is made all the more challenging by the amount of wiring in each locomotive – a full 7 km! Until recently, the tests were carried out using borrowed equipment but, when the opportunity came for the engineers to acquire an insulation tester of their own, Megger’s MIT420 was their unanimous choice.

“The MIT420 is compact and easy to operate with one hand,” said Ian Jackson of the WLA, “which is particularly important given the cramped conditions we often have to work in on the locomotives. It’s also robust and easy to use. A really big benefit, though, is its 1,000 V test range. Testing at this voltage allows our engineers to find many potential faults that might otherwise have been missed.”

The MIT420 is now in regular use, and has played an important role in the ten-year overhaul that the D1062 has recently undergone prior to its return to service. The tester will continue to be in great demand, however, as the WLA’s other locomotive, D1013, is about to be retired pending its own refurbishment.

“We’ve always seen Megger instruments as the industry leader of test equipment,” said Ian Jackson, “and our experience with the MIT420 certainly confirms this. It’s accurate, dependable and, like our locomotives, it’s a real tribute to British engineering. What more could anyone ask for?”