TEMPORARY building specialists Spaciotempo are playing a key role in the multi-million pound development of a new whisky distillery in Scotland. 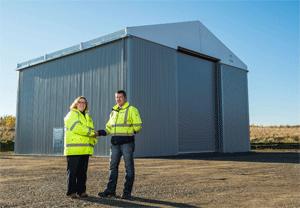 Macallan is developing a new production facility at its headquarters in Northern Scotland after seeing booming demand for single malt Scotch reach record levels both at home and overseas.

The multi-million pound project meant fabricators Forsyths, who are constructing and supplying bespoke apparatus for the state-of-the-art plant, had to find bigger premises nearby - and they turned to Spaciotempo for the answer.

The company was one of very few able to provide a temporary building tall enough to meet requirements and the facility was installed on site in Speyside within days.

Duncan Nicoll, site supervisor for the project at Forsyths, who supply a range of specialised equipment for the beverage industry, said: “The new distillation plant will need bigger and better equipment and our job is to supply that operation.
“We needed a building tall enough to carry out the blasting of stainless steel vessels, which are five-and-a-half metres in diameter, and we wanted it to be sited as close as possible to the plant.
“We needed a cost-effective building that was also quick to install and Spaciotempo came up with the ideal solution.
“They were one of only two companies of their kind able to meet our precise brief, while the quality and robust nature of their building made them stand out.  “The facility was installed in a seamless operation which took just four days and everything I’ve seen since has confirmed that we made the right choice of supplier.”

Natalie Balfour, Spaciotempo’s Area Sales Manager based in Scotland, said: “Forsyths’ requirement was unusual in that they wanted an eave height of eight metres including a huge roller-shutter door.
“But as we design and manufacture all our own buildings, we can meet all types of bespoke requests so it wasn’t a problem and we were able to provide exactly what they needed.”

A spokesman for Macallan said the decision to build a new plant, expected to open in 2017, was led by record market levels.
He added: “Production was increased by around 30 per cent only five years ago, but now we’re having to build a new distillery to keep pace with the growth of the brand.
“We’re seeing record demand both at home and abroad, particularly in Asia and America along with Far Eastern countries such as China, Japan, Taiwan, Vietnam and Korea.”