The CE marked Cygnus wireless fire alarm system from Bull Products, which is used widely on UK construction sites, has just been extended to include EN54 compliant parts to comply with the new requirements of JCOP 9th edition for use in temporary accommodation units. 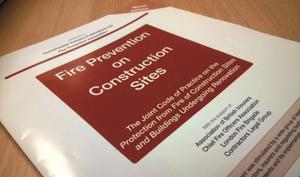 The only significant change that has been made to JCOP in relation to fire alarms is, a fully certified EN54 Fire alarm system must be installed in TAU’s (Temporary Accommodation Units) which are located either inside the building under construction or refurbishment; inside another permanent building; or within 10m of such buildings.
Other than this small change, Cygnus fire alarms manufactured by Bull Products remain one of the leading alarm systems for construction sites.
The new Cygnus EN54 unit can be easily linked into the Cygnus system network of devices on the overall construction site via the Cygnus input/ output unit.
Designed and developed with a number of major construction companies as a temporary system for use on construction sites, the Cygnus system has an impressive capability for linking together 480 units in 15 zones around evolving construction sites, each zone having a capacity of 32 units.  The system can be used time and time again on any type of construction site.
Bull Products’ Cygnus system comprises a choice of units which are battery operated, and include fire alarm call points, smoke detectors, heat detectors, first aid call points, and combined call point and first aid alerts.  A PIR option is also available on any of the modules which can detect an intruder and alert off-site personnel for added safety protection.
Contractors such as Kier, Skanska and BAM are amongst many which are already utilising the host of benefits which the Cygnus wireless fire alarm system brings to construction around the UK.