The first thing that customers come into contact with at No 1 Watson Street is the front door - operated by Relcross LCN 9000 door openers. 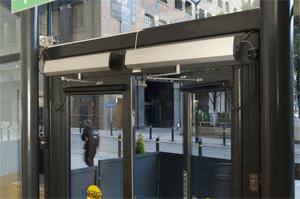 No 1 is Manchester’s newest, specialist beer bar with 60 different beers on offer - 12 draught and 48 bottled beers. They also have an excellent range of wine, cocktails and delicious food and are conveniently situated just down the road from the Central Convention Complex.

Previously branded “Taps” the bar was purchased by VCP Taverns in June 2014. Ongoing refurbishment started straight away with the main door controls being installed in February 2015 to replace controls that could not cope with the heavy winds frequently occurring in Watson Street. In fact it’s sometimes called the windiest street in Manchester.

In these circumstances the REL 9140 can be an ideal door control. The door can be used as a fully automatic door with the opening cycle initiated by wall mounted push buttons. When not operated in this way the door can be set to “Push ‘N Go” where an attempted manual opening leads to the automatic controller taking over to firstly open the door and then, after a set time delay, fully closing the door and holding it closed until it is next required.  The Electro-mechanical gearbox acts as a manual closer when the door is not automated or the 24v dc power is lost for any reason. The unit has been tested successfully to over three million cycles.

All the control functions can be tailored to meet specific site conditions. This includes the power boost; opening speed; backcheck speed; hold open time delay; backcheck position; closing speed; latch position; Push ‘N Go and delayed activation. At No 1 Watson Street a header mounted safety sensor was fixed to the pull side of the door header to detect obstructions when the door is fully closed or opened.

Taps was closed at the August bank holiday in 2015 and re-opened as No 1 Watson Street early in October with an official opening night later in the month. During the closure most of the door hardware was also replaced including internal door closers, hinges, handles and disabled slide bolts on the disabled toilets. All supplied by Relcross.

Sales and Marketing Director Stuart McMaster said “No 1 Watson Street is a good example of the complete range of door controls and hardware that we can supply from Relcross and tailor that supply to fit in with the refurbishment programme.”