Development at Westminster Kingsway College, a further education college in the heart of central London, has seen the creation of more space and the re-fitting of existing areas in the college. 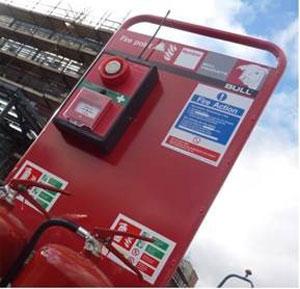 During this construction work, contractors BAM Construction Ltd have employed some 200 Bull Products’ Cygnus wireless fire alarm devices.  Linked to a central Cygnus control panel, there are 53 Cygnus call point alarms, 105 smoke detectors and 29 heat detectors, and a number of interface units which link with a new fire alarm system installed in the existing building.
The Cygnus alarm system certainly came into its own recently, when fires started in two separate parts of the construction area.  The first event was a power surge causing a fire in one of the classrooms which was spotted visually by one of the electricians who raised a fire alert through manually operating the Bull Products’ system.
In a second event, fire broke out in the UPS room which was automatically detected by the Cygnus system with an alert sent to security staff who called the fire brigade.
Contractors BAM were thankful that the alarm system worked so well, with the wireless Cygnus system co-ordinating many work areas with different devices.
The Phase 2 development work at Westminster Kingsway College involves infilling a light well and atrium to create 500sq.m. of extra space as well as stripping out and re-fitting existing areas of the college with classrooms and kitchens.  The layout now incorporates a ground floor library, a canteen on the first floor and break-out areas on the second floor with a mezzanine area for toilets and changing rooms. The work has been a 70 week programme which is scheduled to finish at the end of October.
The Cygnus wireless fire alarm system is a major innovation for construction sites and has been designed and developed in conjunction with major construction companies to incorporate all the features required for larger construction projects. The Cygnus system is able to link no less than 480 units in 15 different zones.  Individual units may be either a fire alarm call point, first aid alert point, smoke detector, heat detector or a combined call point and first aid alert alarm.
Where there are multiple sites within range of each other, the CE marked Cygnus system has been designed to operate on different site addresses in order to keep each system separate and free from interference.
A major feature of the Cygnus system is the optional control panel which provides a very sophisticated capability with an event log function which records any events such as an alarm activation, low battery warning, and signal faults, all of which can be viewed if necessary in the history folder held on the panel.  The system also has the ability to test all units and has an evacuate function which will act as a call point to the rest of the alarm units.
Each unit in the system can provide the panel with information at regular intervals.  This explicit information confirms the unit is still present and what the battery status of each device is.  Known as the ‘heart beat’ this message is monitored by the control panel where fitted and if the ‘heart beat’ is not heard for several intervals, the control panel logs a full status for that unit.
A PIR option is now available on any of the modules which can detect an intruder and alert off-site personnel for added safety protection.
Bull Products offers a full one-year guarantee on all Cygnus devices and provides high levels of technical, on-site and after-sales service support in addition to its standard maintenance contracts.
Further information on the Cygnus wireless alarm system is available from Bull Products website.