The Science Museum at Wroughton, home to over 38,000 large and iconic objects from the Science Museum Group, has recently received an upgrade to its lighting scheme for one of its large store buildings, using Venture Lighting Europe’s long-life VLED Integrated Driver Technology (IDT) luminaires. 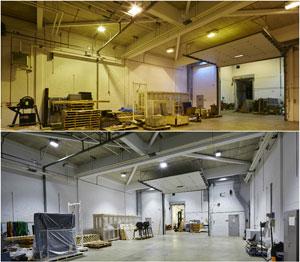 The Science Museum at Wroughton, home to over 38,000 large and iconic objects from the Science Museum Group* has recently received an upgrade to its lighting scheme for one of its large store buildings, using Venture Lighting Europe’s long-life VLED Integrated Driver Technology (IDT) luminaires.
Working with the Swindon Yesss Electrical team, Venture supplied over 140 of its VLED IDT luminaires in a range of outputs, which have been installed across the site.
Located at the former Wroughton airfield, the large objects, library and archive store ranges across several hangars, which stores a collection of aircraft including the Lockheed Constellation and DH Rapide as well as many vintage cars, industrial machinery ,large scientific instruments, archive and library materials.
The site was previously using metal halide lamps which produced poor light levels and proved less efficient when compared with the capabilities of LED lighting. Since installing Venture’s IDT luminaires the lighting levels across the site have dramatically improved to offer a better display of the objects as well as enabling safer operations within the storage area.
Due to the integrated driver technology of the luminaires the new scheme also offers a long life of 50,000 hours, which eliminates frequent replacement and maintenance costs and prevents regular disruption to the museum collections.
Trevor Woodman of Yesss Electrical Swindon worked closely with the museum to provide the new efficient lighting scheme. He commented, “We advised the museum to upgrade to Venture’s VLED luminaires as an energy saving alternative which will ultimately save them a considerable amount of operation and maintenance costs whilst dramatically improving the lighting levels within the hangars. We believed that Venture’s IDT products were particularly suitable for this application because they are an efficient and reliable product from a leading manufacturer. The customer is extremely happy with their new lighting scheme.”
Venture’s VLED IDT luminaires have been used to light the hangars containing the collections, as well as the site’s storage areas and entrances. The range of fixtures was supplied in a variety of outputs, ranging from 60W to 180W, to produce the right amount of light required for each area. The luminaires have not only improved the light levels but will save energy for the museum. This, as well as the increased life and eliminated maintenance of the luminaires will reduce the yearly running cost of the lighting scheme.
The product’s integrated driver allows the luminaire to operate directly from the mains making it particularly easy to install. This also eliminates the risk of early product failure due the omission of typical power capacitors in a traditional driver circuit.
The technology of the IDT luminaires also incorporates a smart heat sink system which allows built up heat from the LEDs to dissipate from the fixture without damaging the performance or reliability of the lighting. The IP65 rated fixture has been designed and tested to ensure that it remains fully efficient even in the most demanding of applications.
Also available as industrial and street lighting solutions, the IDT luminaires comprise individual 30W LED modules and can be built up to 180W to meet the requirements of any lighting scheme.
The VLED IDT systems have a Colour Rendering Index (CRI) of 80 at a colour temperature of 5700K, producing a bright, cool-white light, with other colour temperatures available on request. This high-quality light is excellent for reproducing the accurate colour of objects as seen under natural daylight.