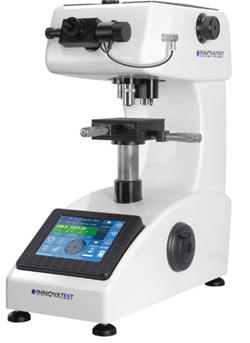 The Nova 130/240 series of Micro Vickers and Knoop hardness testing machines offer a versatile and user friendly solution for a wide range of micro-hardness testing applications.

Both units include USB output, up to 9 dial selectable test forces, and a full colour touch screen with interaction dialog support which tells the user about the current status of the device, including instructions on performing one or more tests. The user is lead step by step through the handling of the tester by the intelligent dialog system, and the bright colours on the display clearly inform the user of the test results.

Bowers Group represents INNOAVTEST’s range of hardness testers in the UK and Ireland, and the Nova 130/240 series is the latest addition to the wide selection of hardness testing machine offered by Bowers Group. Paul Hold, Technical Sales Manager for CV Instruments at Bowers Group, said: “The new NOVA 130 and 240 series Vickers and Knoop hardness testers are market leaders in their field of application. As advanced, yet traditional dead weight machines, these hardness testers offer an intelligent dialog system to guide the user through their handling, making them incredibly easy to use and extremely versatile.”

Made in the Netherlands, the Nova 130/240 series is made using the best quality components for both electronics and mechanics. It is also covered by INNOAVTEST’s 2 year manufacturers’ guarantee.