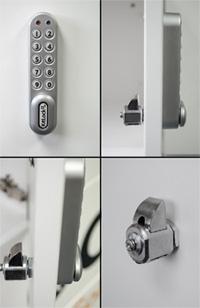 Codelocks today announced a series of product updates for its best-selling locker lock, the KitLock 1000. The new features, which include a battery level indicator, slam latch accessory and six-digit NetCodes, are designed to make the operation and maintenance of the locks much easier to control and manage.  “We are constantly looking at ways to make our range of digital door, cabinet and locker locks easier to use on a daily basis and the features we’ve announced today are good examples of some of the enhancements we’ve made,” explains Grant Macdonald, Managing Director.  “With the Internet of Things (IoT) continuing to take centre stage, customers tell us that greater connectivity is key and our plan is to automate more and more features to take advantage of this trend.

“An example of this is our NetCode application, where users can generate lock codes from a remote location and send them to the person requiring access via email or SMS – a process far more convenient than having to manually generate codes, and saving a great deal of time if codes need to be issued on a regular basis.”

The new product features include:


The new battery level check is included in all new KL1000 purchases, the slam latch accessory is available for £6.50 from the company’s website: http://www.codelocks.co.uk/kitlock/minislam-latch-for-use-with-kl1000.html