It’s been a busy and exciting past year for Lanarkshire based Hamilton Academical FC – not only did the team win promotion to the Scottish Premier League, but the club also installed a brand new pitch. 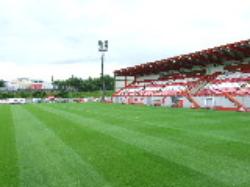 The Accies had to replace the artificial pitch with a traditional grass one – and install under-soil heating – after gaining promotion to the Scottish Premier League (SPL). So there was no time to lose at the end of the 2007/2008 season if the club was to ensure it was ready for kick off again at the beginning of August 2008.

“We knew that Souters had the resources and expertise to meet the club’s needs and exacting standards for installing natural grass facilities,” says Hamilton’s head groundsman Colin Fraser.

“And we also knew, via word of mouth and its excellent reputation within the industry, that the company is committed to producing the highest standard of service and that its level of expertise is second to none.”

“All the equipment that we use is designed specifically for the tasks in hand and operated by skilled professional operators, many of which have moved from groundsman and greenkeeping careers,” adds Souters’ Project Manager John Rushforth. "And having expert staff means that we can offer high output and efficiency while maintaining the highest quality.”

Efficiency was the key for the club, as was quality. The club’s previous artificial pitch took a lot of criticism from home and away players alike and this was a chance, among other things, to put things right. There was no room for error in terms of pitch quality or timing.

So, Souters was charged with constructing a premier-league quality root zone pitch with a washed-turf finish in a work window of just six weeks.

The exacting pitch specification included the installation of mains and lateral drainage, followed by a six-millimetre grit layer on top of the drains and across the entire surface to a depth of 75mm and then topped with root zone. This consists of a 150-mm deep layer of medium-fine sand and 100mm of WBB Sport root zone, topped with washed turf seeded with Barenbrug’s Bar8.

The washed turf was supplied by Lindum turf and laid by sub contractor Senior Golf Construction. And the fertiliser programme was devised and implemented by Rigby Taylor.
Fibre sand was part of the original spec, but head groundsman Colin persuaded the club to take the washed turf route instead.

“I knew from experience that this would serve the club and the players much better. And the pitch is certainly looking very good at the moment – I’ve heard nothing but praise for it so far,” he says.

Colin picked up his current mantel at the club literally as the old artificial pitch was being ripped up. He’d worked for 11 years previously at another Scottish football club – Livingstone FC. And despite being thrown in at the deep end at Hamilton, he’s very much enjoying his new role and managing the new pitch.

“The previous pitch I worked with had washed turf and I had no problems managing that and I knew that washed turf would work well with the root zone here.

“It’s certainly looks very green and healthy at the moment. We did have a slight problem with some leaf spot a few weeks after installation was complete, but that’s to be expected considering the recent weather conditions and the fact that, as a new pitch, we were putting it under a considerable amount of stress to get it ready in time for the start of the season.”

And Hamilton can now be added to that prolific list. Colin is certainly impressed with the contractor’s work and if recent form is anything to go by then so is the team.

“We put lots of water on the pitch for the first match, at the team manager’s request, to make play fast. And it was certainly zippy and the team did well.

“And the pitch is proving to be up to premier league standard too. We had a light training session on it the day before for the first match and it stood up to that very well. It’s not cutting up too badly after match play either – the work required after a match is nothing I can’t handle.”

So it’s a new league and a new pitch for the Hamilton – and a perfect start to the year.