In support of National Apprenticeship week which runs from 14th to 18th March, mk Profile Systems share here their positive experience of taking on an engineering apprentice. 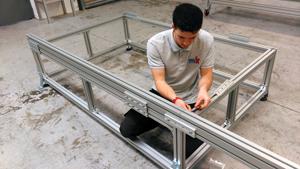 Ben Southan joined the company in September 2014 having first completed his A levels, and is now on the 2nd year of his Apprenticeship. He spends one day a week at Central College Nottingham and the other 4 days he is a key member of the mk Profiles team.

When asked why he chose to do an apprenticeship Ben stated that he wanted to start work after college and found the thought of incurring huge debts as a result of University fees very off putting. Ben liked the idea of earning money whilst gaining a qualification at the same time. He was also pleasantly surprised at the variety of apprenticeships on offer.

MK Profile Systems based in Nottingham is the UK division of the mk Technology Group which has been providing aluminium profile technology for over 40 years. mk offer a range of compatible modules for factory equipment by utilising their 4 product groups – Profile Technology, Conveyor Technology, Factory Equipment & Linear Motion. Their modular technology systems centre around more than 250 profile cross sections.

So what inspired mk Profile Systems to employ an apprentice? “We felt that a young person could bring lots of enthusiasm and an open mind set to our business. They would not be ‘set in their ways’ and we would have the freedom to mould our apprentice to our way of thinking. Ben has proven himself to be a real asset to mk Profile Systems, having shown skill in the area of design he has already become heavily involved in that area of our business. It has been really rewarding watching Ben’s progress and I feel he has a very bright future ahead of him.” says Darren Whiteside, Director at mk Profile Systems.

Having successfully completed the first year of his apprenticeship, Ben is now half way through the 2nd year of his 3 year apprenticeship, at the end of which he will be awarded a BTEC.
When asked what Ben enjoys about his apprenticeship he states “I like the fact that I am gaining experience whilst working towards my qualifications. I get to meet new people both at work and at college. Everyday I am exposed to new experiences and training opportunities.” When Ben showed he had a flair for design, his employers sent him on a 2 day training course to help him master some design engineering 3D software.

If you feel that you like to find out more about becoming an apprentice, or are an employer interesting in taking on an apprentice visit www.apprenticeships.gov.uk.