'It's an ill wind that blows no good'

This is said when things have gone wrong; the idea being that when bad things happen, there can also be some positive results. 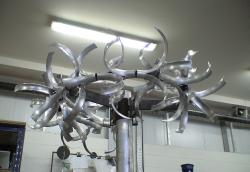 Predictions by the government that deteriorating economic conditions will send crime rates spiralling are borne out by a Vandgard analysis of official police figures which reveals a significant increase in burglaries across England and Wales.

In many cases, the percentage rise was in double digits and in most it was more than 5 per cent. Inevitably this will lead to increased demand for innovative, reliable products and installations from the Fencing Industry.

Vandgard has been manufacturing designing and developing anti-climb guards for more than 20 years and over that period has provided a service across the spectrum of public and commercial organisations and a wide supply network to the Fencing Industry.. from private homes to nationwide supermarket chains to Police and public security suppliers Vandgard provides the very best in Anti Climb Solutions, the latest of which is the illustrated quick clamp protector.

Originally a bespoke design to protect commercial satellite dishes and LNB’s and now available for any pole mounted installation. These units are fixed in minutes and will provide effective corrosion free protection for at least the next 40 years.

Unlike broken glass or razor wire, which can form mantraps, or impaling spikes which are often illegal and can also present a dangerous hazard to employees working overhead or nearby. Vandgard is not designed with intent to cause serious harm, it's rotating action creates an unstable barrier which rolls if anyone attempts to climb over it.

Visually it is a clear warning in itself and so does not contravene either the Health or Safety at Work Act, COSHH regulations or any other civil or criminal laws.

Vandgard rolls away aggression without intent to harm, so the ill wind won’t blow on the installer.