A rare combination of seamlessly-integrated perimeter protection systems was one of the main attractions for security managers and specifiers of critical national infrastructure sites at the rebranded Security & Counter Terror Expo (SCTX) 2016. 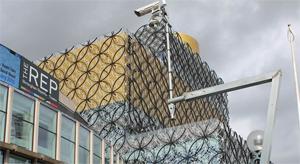 The Zaun Group majored on its stand (J50) on its unique ability to design, manufacture and install both physical and electronic perimeter security systems, all from a single source.

The Zaun Group can also design, manufacture and install turnkey high-security solutions incorporating any of its Ministry of Justice (MoJ) approved posts, panels and toppings or its range of temporary hostile vehicle mitigation solutions, which includes the original PAS-rated MultiFence, developed specifically for the London 2012 Olympics.

EyeLynx has bolstered its range with the EPR-100 radar detector, launched at SCTX, which promises to cut annual security budgets dramatically by reducing the reliance on human patrols and manned guards by autonomously controlling CCTV.

This follows hot on the heels of the introduction of Pharos Optimus – a modular CCTV solution with wireless 4G router allowing up to four configurable devices to be mounted on a mast – and SharpView Rugged, an intelligent video surveillance system that improves passenger safety on public transport.

The comprehensive solutions include Zaun's most intruder-resistant fencing, ArmaWeave, and FST prison toppings from Binns, whose acquisition by Zaun was announced a year ago at the show.

Zaun's HiSec Super10 is believed to be the first single mesh system to be approved to SR2, while it has achieved security ratings to LPS 1175 for a number of its pedestrian and vehicular swing gates from the LPCB, as tested by the Buildings Research Establishment.

Both Zaun Limited and Binns Fencing were appointed to the MoJ ramework as approved suppliers of permanent and temporary galvanised steel fence posts and welded steel fence mesh, while Binns is also an approved installer.

SCTX 2016 took place on 19 and 20 April at London's Olympia and is the leading international event dedicated to mitigating the threat of terrorism, attracting over 10,000 international security professionals from over 100 countries across the globe.

They came to explore solutions for threat mitigation, protection against attacks and to understand the risks they face and to see more than 300 exhibitors with the latest counter terror technology and solutions.