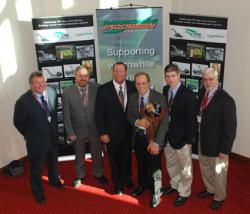 The Edwin Budding Award was created to recognise technical professionals in the turf equipment sector whose actions have gone above and beyond the norm to help shape the golf industry into what it is today. Edwin Budding was one of those individuals who helped define golf, not as a player, but as an engineer. He designed the first cylinder mower, which has shaped golf as we know it today.

Eric Kulaas was selected by a committee of industry professionals chosen by IGCEMA back in November 2008. He was presented with his award by David Withers, Managing Director of Ransomes Jacobsen, at a ceremony at BTME in Harrogate on 20th January 2009.

The committee were particularly impressed with Eric Kulaas’ pioneering work in web-based information exchange using the TURFTech website, which he designed and developed. This has enabled technicians in grounds care industries around the globe to network and exchange best practice for the first time.

Presenting the award David Withers said, “The IGCEMA wanted to recognise individuals who demonstrate the same qualities as Edwin Budding; influence significant change in our industry above and beyond normal day-to-day work. IGCEMA has created an award for actual, measurable accomplishments, to make an accurate judgment of contributions made to the industry, and reward those contributions. We are delighted that Eric has won this award, which was presented for the first time last year to Ed Combest, a retired professor from Lake City Community College in Lake City, Florida.”