Evac+Chairs from Evac+Chair International are now in place at Twickenham Stadium to provide a quick and safe means of emergency stairway descent for mobility impaired visitors. 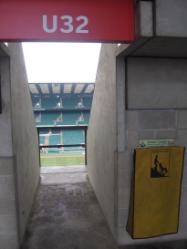 The 82,500 capacity stadium has a large number of mobility impaired people attending matches and events.  As such, the stadium had to make provisions for transporting them downstairs in the event of lift failure, particularly in the south stand where the mobility impaired seating area is in the middle tier not at lower floor level.  They also needed to be able to move people with a medical emergency from within the seating bowl downstairs to a level landing in order for medical teams to take over.

On choosing the Evac+Chair for both functions Ken Taylor, safety and event manager for the Rugby Football Union at Twickenham said, “We saw the Evac+Chair at the National Health and Safety Exhibition and it was by far the best product available for our needs.  It is widely used because it is effective, reliable and easy to operate.  The company also offers a servicing contract and training which sets it apart".

Ten chairs are situated throughout the stadium and have already been called into action.  During a recent three day Jehovah’s Witness Convention, glass in the lift to a first floor suite was broken rendering it out of action.  Six Evac+Chairs were used to transport the 23 mobility impaired people attending down two flights of stairs to the stadium exit.  Mr Taylor added, “It proved to be a very good test of the product and our system.”

The Evac+Chair uses continuous rotating v-belts to provide a smooth and controlled descent over stair nosings in proportion to passenger weight, which means it can be operated by a single person with no exceptional strength required.  It is one of a complete package of solutions from Evac+Chair International for all types of stairway evacuation.