Playground equipment manufacturers Proludic got involved from the start when a group of residents from the village of Willoughby on the Wolds in South Nottinghamshire decided that the children of the village deserved better playing facilities. 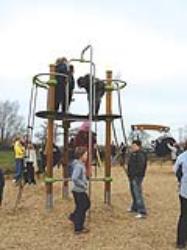 The group, consisting mainly of local parents, named themselves Willoughby Community Park Association, and set about creating a new play area for the village. The village united to make the project a reality and raised the initial funds through events such as a Charity Ball and Summer Fete. A donation was also made in memory of a long-standing local farmer. The remaining bulk of the funds were the result of a successful application to WREN, a member of the Landfill Community Fund.

The existing play facilities in the village were very limited, and the Association proposed to create a new area which was easily accessible to all residents.  WCPA secured a lease on an old farmer’s field, which Nottinghamshire County Council now owns.  This field was agreed for the new play site. Stage One of the project was to provide play equipment and a trim trail to encourage the children and young people outdoors.

The Project
Willoughby Community Park Association was aided in their project by the Rural Community Action Nottingham (RCAN) who guided them through each stage.  RCAN asked Proludic Ltd to be pro-actively involved early on in the project and representatives of the company attended project meetings in an advisory capacity.  WCPA includes members with expertise in planning, consultation and funding, but Proludic was able to contribute with their technical and key industry knowledge.  Proludic provided the play area design that was instrumental in securing the WREN funds.

The designers at Proludic created the playground proposal with an understanding of what funding bodies are looking for in a successful project.  The area was designed in line with Play England’s ‘Design for Play Guide’ recommendations.  This improved the project’s chances of being accepted by funding bodies, as it was designed in strict accordance with the government’s own guidelines.

The Play Area
The completed play area at Willoughby is a natural site in keeping with the locality.  Timber based equipment, log stockading and loose-fill surfacing provide an aesthetically pleasing play area, with exciting and challenging equipment to keep the children occupied.  Multiple items of equipment provide sensations of rocking, swinging, climbing, spinning, and sliding and give opportunities for group, and solo play.  Small rocks and sensory planting have been included within the scheme to provide the children will elements of natural play, and different sensations and textures.

Outcome
Invigorated by their success so far, Willoughby Community Park Association is keen to expand the area to include a level grassy play area.  Money for Phase Two of the development has already been sourced from Rushcliffe Borough Council’s Play Builder funds, and £13,000 will fund a Hexagonal Swing and landscaping features provided once again by Proludic.

The play area is already a fantastic success, with the local children eager to go out and play.  It is a triumph for WCPA; demonstrating that all its hard work has been well worth it.  And it is a clear demonstration of how Proludic can work together with community groups to create a highly successful play area.