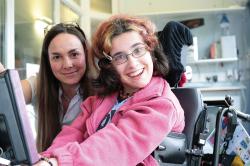 The college helps students to achieve goals and reach their potential through innovative programmes of education and independence training.  Over the years the college’s facilities have improved so that students with more severe and complex conditions have been able to attend.

Over the years the college’s facilities have improved so that students with more severe and complex conditions have been able to attend.

In order to accommodate young people from all over the UK the college has invested considerable funds in accommodation. Residencies include four on campus and two in Cheltenham’s town centre.  These have helped to create a vibrant social life and community spirit that make the college so much more than just a learning provider.  This year is an important one for the college.  As well as celebrating its 40th anniversary the college has launched the Star Appeal, a campaign aimed at raising £15.4 million for ambitious expansion projects.

Although the college has not suffered any breaches of security, Gerald Noble, Projects Engineer and Lynette Barrett Residential Services Manager decided that with the expansion of the college, improving security for the students should be part of the project plan.  One residency already had an access control system on it.

Lynette explained: “It had not come up to expectations, it is very difficult to administer and expanding it will be difficult and costly.”

Mark Hone Director of Stroud Alarms, Nailsworth, Gloucetershire  was called in to advise.  In discussion with Gerald and Lynette it became obvious that the new system must be able to grow with the college’s expansion, be easy to administer and from an established manufacturer.  Mark recommended Net2, an intelligent PC based access control system from Paxton Access.

Mark said: “Net2 can grow with the college, using TCP/IP connectivity on the college’s network to link the new buildings.  An added bonus with the Paxton Access system is the new hands-free capability that can easily be incorporated into the system where required.”

Lynette said: “We wanted a system which would improve security, while being easy to administer. Token management has to be quick and easy because this is a very busy environment.  The Net2 system recommended by Mark appeared to be very easy to manage, could expand with our needs and had the added advantage of offering contactless hands-free access.  Some of our students struggle to use conventional locks and keys.  As a consequence some students would simply leave their doors unlocked or even open!”

Net2 was initially only installed on one building to evaluate the system.

Lynette said: “From the beginning it was clear to see that it was having a positive effect, making access easier for the students and the staff.”

As a result Net2 now currently controls about 30 doors at four of the five residencies.  The installation was made easier by the college’s IT network.

Mark said: “Using the network means I did not have to hard wire between buildings.  Any future doors will be easy to add due to Net2’s modular nature and the college’s network.  Another good thing is that Net2 readily integrated with the existing fire alarm.”

Many of the doors in the residencies are hands-free enabled with automatic door openers.  This was a necessity so that every individual would benefit from the system.

Mark said: “Net2 hands-free is the easiest way to offer this convenient means of access, essential for the college, but also great for buildings that need to comply with the Disability Discrimination Act.  Some of the students attach the hands-free tokens to their wheelchairs and the PROXIMITY readers pick up the signal and unlock the door as they approach. This removes manoeuvring into awkward positions to present tokens.”

Each student’s token, whether it be proximity or hands-free gives them access to all communal doors and their own bedrooms. Students can no longer enter other student’s rooms by mistake as their token only allows access to their own room.

Lynette received about half an hour of Net2 software training from Gerald.  She can add and remove users, and says that Net2 has streamlined the process of issuing tokens at the start of each academic year.  Adding and deleting users takes about 30 seconds.  Another advantage the administrators have found is that Net2’s events screen can be used to help find people.

National Star College plans to expand the system to all the buildings on the site and also to control the main gates. This will mean we always know who is on site and will provide a useful register in case of emergencies.  By 2009 the management hope to complete the facility.  Every room including classrooms will be secured.  Because students will have to use their token, the college will have complete traceability in the event of a missing person.

The introduction of Net2 has meant that students aren’t so dependent on others to move around the college.

Lynette said: “It’s a busy place and this has helped to increase privacy and made students more independent - something they strive for and are proud of.”

Gerald added: “We’re looking after vulnerable young people and I want the environment to be as safe and secure as possible.  Net2 has achieved this as well as giving students more freedom too!”