With six independently controlled current outputs, the new FREJA 306 protection relay test set from Megger provides an easy to use and economical solution for testing protection relays, including differential types. 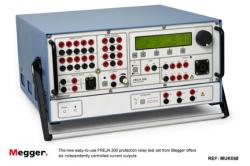 To further enhance its versatility, the FREJA 306 features extended Hi Current outputs, rugged construction and a wide operating temperature range, making it ideal for field use.

The FREJA 306 test set is suitable for use as a standalone device, or in conjunction with a PC running the powerful FREJA WIN software package. In either case, the operation of the instrument is straightforward and intuitive, with FREJA WIN adding the benefits of a highly intuitive graphical user interface, as well as enhanced options for automated testing.

The outputs of the FREJA 306 can be configured as 3 x 15 A plus 3 x 35 A, or as 1 x 100 A. The outputs with a 35 A rating are particularly useful when testing 5 A relays, while the capability of these outputs for generating up to 50 V facilitates the testing of many types of electromechanical relay. The FREJA 306 also provides both low-level analogue inputs, which are designed for transducer measurements, and high-level inputs for normal voltage and current measurements.

Static and dynamic tests can be performed with the instrument including, for example, pre-fault and fault generation, simultaneous ramping of multiple quantities and waveform editing. The FREJA 306 can also be used, in conjunction with FREJA SIM software, as a disturbance simulator with the capability of importing recorded disturbances.

The new FREJA 306 complements the existing and very popular FREJA 300 protective relay test set, which will continue to be available. In addition, users of FREJA 300 instruments can upgrade them at any time to the full FREJA 306 specification simply by adding an auxiliary CA30 amplifier module that attaches easily and neatly to the bottom of the existing instrument.