Elta fans have played an important role in improving the match day experience for supporters on West Bromwich Albions' return to the Barclays Premier League. 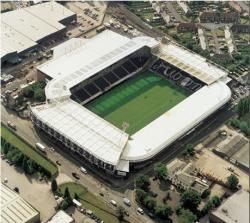 Albion decided to implement a £3million+ refurbishment of the 25-year-old Halfords Lane Stand, renamed the West Stand, after winning the Coca-Cola Championship last season. This work was undertaken during the summer months to improve the facilities for fans, club staff and the media.

With such a tight turnaround to complete this large project, timing was crucial to get everything ready for the 2008/09 season. Mechanical and Electrical contractors W T Parkers of Burton upon Trent, Staffordshire, turned again to Elta fans to meet the very strict deadlines for the supply of various fans and ancillaries, having successfully completed a similar project at Burton Albion. Pete Elver, Director of Stadia Projects, introduced WT Parker to Albion, after working with them on Burton Albions' Pirelli Stadium.

Stadia Projects provide a service that bridges the gaps between the technical specifications of a construction project and the crucial, practical requirements of being fully operational. Petes' first-hand knowledge of this comprehensive role makes him proactive in finding the best suppliers in the industry. He says, “It is important when dealing with a client, that the client is comfortable saying what they want and need and I accurately interpret that to the suppliers. Through my in-depth experience of reliable and quality suppliers, this makes the clients' project really happen”.

Spatial and electrical restrictions within the stadium meant that one unit in particular, a Twinflow STBD centrifugal fan, had to be specially designed and constructed at Elta Fans’ Kingswinford factory. The Twinflow range of fans is specifically designed to overcome space restrictions in buildings with low ceiling voids, providing exceptionally quiet performance for those buildings where fans have to be sited within close proximity to its occupants.

The contract included the supply of a total of eleven different sizes of Quietflow SQT units, one STBD Twinflow unit, one SCP Plate Axial Fan, three different sizes of SMC circular Mixed Flow units and all mounting accessories, silencers and connectors. Kevin Beeston, WT Parker Contractors, said, “The limited time for the whole project meant that the schedule for the refurbishment was very tight. Following the initial enquiry, Elta Fans came back with a quotation on the very same day and then fulfilled the order, including the bespoke design and manufacture of the one Quietflow SQT unit. Within two weeks of the go-ahead. Elta also provided excellent technical support throughout and generally resolved every query promptly”.