Vales Sovereign is a new potato variety developed by Greenvale AP, the UKs' largest supplier of fresh potatoes to the food processing and catering industries. 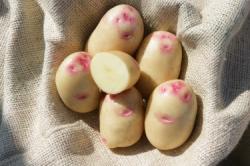 As well as delivering a traditional British potato flavour the new variety scores heavily in terms of the environment as it has a lower carbon footprint than traditional potato varieties because it requires less water and less fertiliser to grow. Now Greenvale has launched Vales Sovereign into the catering sector as box bakers, size-graded for baking, under the Jackpots brand. Jackpots are supplied in 15kg boxes and are available via wholesalers.

"Vales Sovereign is ideal for caterers looking for baking potatoes," says Doug Bell, General Manager of Greenvale at Duns, Berwickshire, who heads the foodservice team. "The flavour is very traditional – in taste panel tests, most comments were along the lines that it 'tasted like potatoes used to'. It's also a great British baker because it is a very robust variety that resists diseases that can spoil the look of jacket potatoes."

Vales Sovereign was bred to combine the 'best of British', with the creamy taste and soft, velvety texture that made classic British varieties like King Edward and Maris Piper the nations' favourites. In 2008 it won Tesco Fresh Produce Variety of the Year – this award looks at all fresh produce, including fruit as well as vegetables, so the fact that a humble spud took the crown underlines just how good the variety is.

Buying Vales Sovereign also supports British farmers. Being 100% UK-grown, the variety has the minimum of food miles and, since it is grown across the UK, it 'ticks the boxes' in terms of local procurement. Greenvale also offers full from-the-field traceability with the Jackpots.