An SLC 710 fan from the Elta ‘Select’ range has been fitted during an extensive refurbishment of Rick Stein’s Seafood Restaurant. 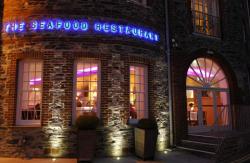 An SLC 710 fan from the Elta ‘Select’ range has been fitted during an extensive refurbishment of Rick Steins' Seafood Restaurant. The single fan was fitted in an outside courtyard area to provide extraction power to three canopies in the main kitchen of the TV celebritys' world-famous restaurant which overlooks the ancient but busy fishing port of Padstow, Cornwall and the Camel Estuary.

Being typical of many Cornish buildings, the restaurants' kitchen is situated halfway below ground-level and with 16 guest rooms above the restaurant, noise levels of the extractor fan were a big consideration. Ventilation and air conditioning sub-contractor for the project, Partridge Ventilation, working on behalf of M&E contractor EIC South West, fitted the single fan to service the three kitchen canopies but was ably assisted by Elta Fans’ representative Mark Butler. Mark programmed the fans' inverter controller on site to restrict extractor performance in order to reduce noise levels for the comfort of guests in the rooms above.

The Revolution SLC is a robust range of long-cased axial Elta fans, fitted with adjustable pitch, aerofoil section impellers with blades made from high-quality, pressure die-cast aluminium. High-efficiency impellers make the SLC a very economical method of moving high volumes of air, at low to medium pressures. The adjustable pitch means that the angle of the impeller can be adjusted on site, (within limits), if a commissioning problem should occur. All units are tested to ISO 5801:1997, (airside performance), and BS848 Part 2 1985, (sound performance). Units are designed and manufactured with procedures as defined in BS EN ISO 9001:2000.
Since opening in 1975 to serve and promote ‘the daily bounty of local fishermen’, the restaurant has established an international reputation for cooking the very freshest fish and shellfish. The recent £2.5 million project included the expansion and refit of the restaurant to add a further 30 covers, an expanded kitchen with new fish preparation area, grills, fryers and wok burner, along with a new wine cellar and terrace overlooking picturesque Padstow harbour.

Elta Fans Building Services division is part of the £50 million Elta Group, a family of businesses with operations in six countries on four continents which, together with a network of international distributors, provides quality fans and related air movement equipment to customers worldwide.