At the centre of Elopak's reputable range of packaging solutions is the Pure-pak® carton, the worlds' first paperboard carton. 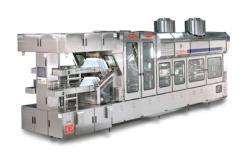 The Pure-Pak® symbol is now the identifying mark for safe, cost effective and environmentally friendly containers made from renewable sources.    Elopak also designs and builds specialist high-speed filling machines to fill the Pure-Pak® cartons.   Currently these machines are one of the cleanest high-speed fillers on the market, forming, filling and sealing around 12,000 cartons per hour.

Elopak machine offer options had always been designed into each individual unit which continuously involved a great deal of duplicate design.  Recently, Elopak came to the realisation that they had to change the way they conducted their engineering in order to increase productivity, improve quality and cost competitiveness and to provide more customer flexibility.  Instead of building standard models with options that require additional design, Elopak decided they wanted to offer different configurations of the same machine as standard therefore creating a more seamless and consistent design process.

Concurrent with the launch of this new strategy, Elopak concluded that their existing electrical computer aided design (E-CAD) software was woefully inadequate for their new venture.  It was prone to generating incomplete reports, dropping drawing files and data as well as failing to reproduce some graphic elements in PDF files.  Hundreds of pages of data per project had to be entered and verified manually to generate reports and much time was being lost verifying the accuracy and completeness of the work produced.  Vendor support also appeared to be non-existent.

Analysis by one of Elopaks' electrical engineers, Michael Ballinger also showed that the legacy E-CAD system was costing the company roughly $25,000 - $30,000 annually per engineer; based on $20 per hour for lost productivity caused by these deficiencies and insufficiencies.  Elopak at this time employed six electrical engineers for hardware design so the annual lost productivity cost exceeded $150,000.

Tasked with performing an analysis to find a possible replacement E-CAD package, Elopak began with due diligence.  The objective was to achieve greater stability, reliability and productivity through increased design automation. They also decided that in order to keep up with global standards, they needed to adopt IEC/DIN standards which drive the global language in electrical design.
Whittled down to two finalists, Elopak chose to establish an objective drawing competition to show the capabilities of each selected E-CAD system.

Both packages used macros, but each processed them differently.  The task involved the use of PLC/IO, a heater circuit, a controlled-loop PID, terminal designs, panel layouts, power generation and associated reports.  Elopak were interested to identify how much time and how many mouse-clicks it would take to draw the circuit in each E-CAD system, implement the I/O, put the panel layout on paper, generate reports and compare the reliability of the reports.

But while EPLAN relished the challenge, the other vendor announced they were withdrawing from the competition. Michael Ballinger commented “I had some experience of the competing E-CAD system from my previous employment and had gained a very favorable impression of it.  At this point I had no real knowledge of EPLAN, however, in hindsight should the other vendor have stayed in the competition I am confident that we would have still selected EPLAN as it far exceeded our expectations.”

“One area where EPLAN was most impressed was through the series of little shortcuts integrated into the software. EPLAN automatically draws the wire connections between devices and allows the user to name any symbol the same name as another symbol, and cross referencing is immediately established.  We were also excited by the ability to be in the same page as another user over the network and see the live updates that they make.”

“We don’t believe that tools drive fundamental change, but it’s fundamental to have the right tools, so people are equipped to make change happen.  From an organisational perspective this applies to all engineering disciplines.  EPLAN presented the ideal platform concept for us; products built on the same database platform, sharing data and synchronized during all project phases.
Consequently Elopak purchased Electric P8 and three other add on modules; EPLAN Fluid for hydraulics and pneumatics, EPLAN Cabinet for enclosure configuration and EPLAN PPE for process plant engineering, along with EPLANs' application programming interface (API) extension, which was used to create the data bridge between Electric P8 and Windchill.  An updated parts database was created and resides in the PLM system, which will feed data back to EPLAN.

The implementation strategy involved training all electrical engineers immediately on Electric P8, whether or not they were going to use it right away.  It was decided to undertake a number of smaller projects first using the EPLAN software to enable smooth and easy migration.  Among these was a cap-orientation project to design a stand-alone unit that can be mounted on current filling machines to orient caps with printed logos to the upright position when attaching them to the carton.  Another involved the design of a new, stand-alone, servo-driven chain conveyor and linear servo drive carton loader to be retrofitted onto current models.
Satisfied with the smaller projects Elopak has now undertaken their biggest project yet using EPLAN Software.  The project involves redesigning the controls platform of each of their current filling machine models from a Mitsubishi PLC system to a Siemens Simotion-D Motion/PLC system.

The first model to complete this electrical redesign is the E-PS120UC.  It was broken down and rebuilt into functional units.  All electrical enclosures, cabling and switchgear were redesigned for Siemens products, and all motion control was redesigned to Simotion and Sinamics.  Mike Jessup, Elopaks' controls engineering manager commented: “With the formerly manual processes which is now EPLAN automated, the job time was shortened by about 20-25%, compared to our legacy E-CAD system.  We were able to go into the build stage of that machine faster than we were accustomed to.” Michael Ballinger added “As long as the engineering time is up front and everything is laid out well at the beginning, I think we’ll cut development time in half.  Longer-term, we would like to design of all our machines in EPLAN, so when our customer unit sells a machine, they can choose the configuration and the system will give us the prints.  It would free up much more valuable time which we can utilize to focus on developing new technology.”
“EPLAN’s global orientation has made it a good fit.  Using Electric P8 not only allows our engineers to draw to DIN standards but also convert projects to other standards automatically.

Elopak has units in more than 40 countries and customers in many more so this feature is extremely useful.”
Mark Taylor, executive vice president of EPLAN commented: “Elopak understood exactly where it wanted to go.  It already had a vision with its legacy E-CAD but unfortunately wasn’t able to realise it.  With Electric P8, Fluid, Cabinet and PPE, it has a complete lineup for electrical, hydraulic, enclosure design and plant process management without having to use three or four different vendors.”

Currently, most electrical design in the UK is performed using simple, two-dimensional CAD systems that produce flat, unintelligent drawings where all accompanying lists and documents have to be researched and assembled separately.  EPLAN can perform these functions automatically and instantaneously, compiling schematics, lists and documents from data which only needs to be entered once.   Using single data entry and EPLANs' capability to enforce design rules, the risk of errors – as well as the need to error-check entire projects – is largely eliminated.

EPLAN differs significantly from other electrical design packages as it is database driven.  Schematics are built up using intelligent symbols and component representations containing all relevant technical information.   As a component is inserted into a schematic, all lists and documentation are updated and cross-linked.  The EPLAN database contains every type of component from the IEC symbol library, from a simple fuse to a PLC.  Intelligent macros can be created that allow common sub-assemblies like motor drives to be inserted into projects within seconds, generating all wire and terminal numbering and greatly simplifying production of product variants.

Unlike legacy programs that function only as standalone products, EPLAN products can be integrated into a corporation’s existing IT architecture.   EPLAN also offers the ability to share data with other engineering disciplines offering even greater efficiency and cost improvements through faster project turnaround times. The EPLAN platform supports a suite of complimentary products including EPLAN Electrical P8 for electrical design, EPLAN Fluid for hydraulics and pneumatics, EPLAN PPE for process plant engineering, and tools such as the EPLAN Engineering Centre and EMI modules that facilitate data sharing and joint project management between mechanical and electrical designers.