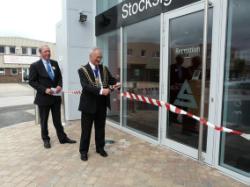 Stocksigns employs 85 people and has been manufacturing signs for 55 years on the Holmethorpe Industrial Estate in Redhill. Over the years Stocksigns has grown from 1 small industrial unit to the 7 units it now occupies, much of which has just enjoyed a makeover and refurbishment.

Stocksigns’ holding company has been able to invest £550K in Stocksigns’ buildings for the future. The refurbishment included a modern façade and entrance to the main building at 43 Ormside Way .The roof has been over sheeted and 180mm of insulation added to bring the roof up to 2010 standards of  thermal  efficiency, as well as much improved facilities for staff including a new kitchen and showers. Also, as part of the project landscaping has begun on some waste land, gained as part of Stocksigns expansion.  This area to the side of the building is in the process of being landscaped to provide an exterior relaxation area for staff. This area is also going to include a small allotment for staff to grow their own fruit and vegetables.

“We are very proud of this investment in our buildings for Stocksigns’ future particularly in light of the current economic climate and that good news is in short supply” said George Pitt, Stocksigns Chairman.

Customers and suppliers joined staff and other VIPs including Stephen Arthurell, architect and key staff from Fileturn Ltd the main contractors in a ribbon cutting ceremony by the Mayor. After which they took a company tour and had the opportunity of making their own commemorative signs.