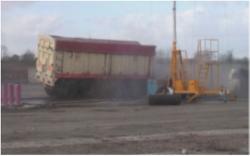 Every now and then, the security industry throws out a story with a jaw dropping wow factor and this is it for 2009, though granted, reading about it will not be the same as witnessing the video footage.

We have all seen crash tests of some sort on television or at exhibitions, where footage of trucks and vehicles can be seen crashing into security bollards that are designed to stop terrorist attack. ATG Access were displaying exactly that at their stand at last weeks’ IFSEC show at the NEC in Birmingham, except their crash test was carried out using a fully laden 30 tonne truck travelling at 50mph.

Just one SP1200 Automatic Rising Bollard was used to stop the truck in the crash test that one test site representative described as “unparalleled” in the safety industry. The representative said, “At this time this is the highest energy level ever tested to in the world. This product has performed to a level which surpasses even our own original specifications.”

When the truck struck the bollard, the energy produced was around 7400 kJ. Just for illustration, this is roughly equivalent to the energy of a 1.5 tonne car travelling at over 220mph.