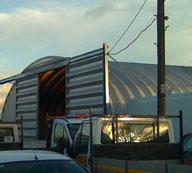 The new detectors from Optex Europe have eliminated false alarms at the van rental companys' depot which was previously blighted by vehicle part thefts and false alarms caused by wildlife and other animals.

Depot Manager, Dan Lings explains; “We had a spate of thefts of parts from the 7.5 tonne trucks parked in the depot and needed to prevent this from happening again. One of the problems, however, was in distinguishing between genuine break-ins, and false alarms triggered by wildlife that approach from a field at the back of our site.”

Dan approached his security consultant, Dean Bolton from Eyewatch Security, who decided to upgrade an existing system to include four BoundaryGard HX and two VX402 detectors, and there have not been any problems since.

As Dan continues: “Since we had the new detectors installed we have not had any problems. I am no longer receiving phone calls in the middle of the night. “We can now be completely confident that we are secure against the threat of theft, and that when we do receive a call, it is genuine and something we need to respond to.”

Since the new detectors have been installed there has not been a single false alarm, testament to the reliability of the equipment. According to Dean Bolton; “It was costing us a considerable amount to send out drivers to check if the site was secure when an alarm went off,” he says. “From our point of view it has drastically reduced the operating costs, and the detectors themselves are not expensive compared to the rest of the market.” Dean also says that the technical support is second to none; “I will not use anything other than Optex Europe detectors on any of our projects,” he adds.

Paul Nicholas, Sales Manager for BoundaryGard adds: “With a combination of the HX series, which has evolved as a result of the development of the benchmark for reliable external detection, and the VX402 range, the Ready Rent a Car depot can be safe in the knowledge that their site is protected. These detectors combine Intelligent Target Recognition, ‘AND’ Logic, Vegetation Sway Analysis, Small Animal Immunity and Summer Night Compensation logic for optimum detection performance in the most challenging security environments.

“The VX402 range is without doubt one of our most time proven performance products,” Paul adds. “As with any growth area, other products come to market but lack the proven performance essential to installers in these applications. The HX series, however, draws on the many years of VX development creating a new product with an inbuilt proven pedigree and matching performance.”