With a potential Brexit just around the corner, a traffic-management plan to minimise disruption for motorway travellers and Cross-Channel lorries may soon get reactivated. 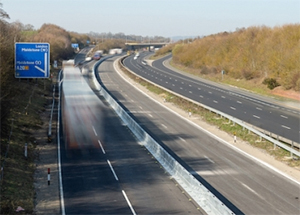 The plan – called Operation Brock – is a set of measures between junctions 8 and 9 of the M20 that will enable the motorway to stay open in case Brexit causes chaos to services across the English Channel and Kent.

Operation Brock – a replacement to Operation Stack from 2008 – includes 20 miles of steel that creates separate lanes on one side of the motorway for lorries to queue for the Channel Crossing, as well as a contraflow on the London-bound side of the motorway so that other vehicles needing to travel to Kent, do not get caught in the disruption.

The steel is made up of Vehicle Restraint Systems (barriers), transitions and end terminals and they were fabricated by Hill and Smith Ltd (part of Hill and Smith Holdings, Joseph Ash Galvanizing’s parent company).

Joseph Ash Chesterfield galvanized the steel – 100 tonnes worth – to protect it from the elements, i.e. wind, rain etc which would otherwise lead to rust and erosion.

The barriers were originally put in place in March 2019 in preparation for the 29 March Brexit deadline but were deactivated after a stay of leave was negotiated with Brussels.

With the Supreme Court’s ruling yesterday on the illegal prorogation of Parliament, we’re not sure what the future holds for Brexit, but the barriers are in place should Operation Brock get activated again.

For information on the design and fabrication of all types of steel restraint barriers and infrastructure products, contact Hill and Smith.