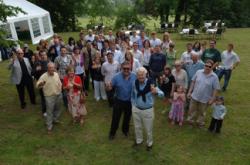 Leicestershire based Notts Sport knows how to put the fun into playtime and so to celebrate its' 25th anniversary as a leading synthetic surfacing provider, company founder and Chairman, Shaun Patrick is throwing a birthday bash for the close-knit team of staff.

Since Notts Sport formed back in 1984, it has grown into one of the most prominent designers of synthetic surfacing systems throughout the UK and Europe – and now plays a vital role in the global market too.

Having just moved from Mandervell Road in Oadby to new, larger premises at Magna Park in Lutterworth, the party is a double celebration, also marking the start of an exciting new era of growth for the family-run company.

“Over the past 25 years Notts Sport has made a triumphant journey and is now one of the sports and play industrys' most exciting success stories,” explains Shaun. “But even though we’re now a world-wide supplier of sports, play and landscape surfacing products and have just expanded our operations despite the recession, we remain a family-run firm which is very loyal to its Leicestershire roots. So what better way to celebrate than with a party held where it all began?”

The ‘birthday bash’ at Catthorpe Manor in Lutterworth will be attended by 30 staff, past and present, who have also been invited to bring their families to enjoy a hog roast, bouncy castle, bucking bronco ride and a champagne toast to 25 years in business.

Notts Sport will also be making a donation to the Latvian Welfare Centre at Catthorpe Manor.