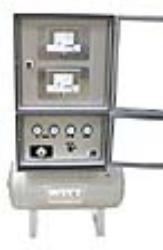 In the manufacture of semi conductor production for example, even a minimal difference in the gas mixture used in the production process can have an adverse influence on product quality and in some cases make the product unusable.

WITT’s integrated MFC (Mass Flow Controller) solution with electronic controlled mixing, metering and analysing components produces very precise gas mixing, whilst automatic error correction ensures the highest level of safety in the manufacturing process. Some manufacturers now use copper in place of gold in the production of semi-conductors and this requires a consistent high quality gas being used with a precise mixing accuracy of 5% hydrogen and 95% nitrogen.

At the heart of the production process is a digital controller, which co-ordinates and monitors the gas mixing process. It optimises the mass flow of the fuel gas, compensating for and adjusting any fluctuations in flow pressure or temperature, so that the gas mixture values are held steady throughout the manufacturing process.

The system is controlled using a touch screen or by a remote control. If the analyser in the system detects the slightest deviation from the pre-set values, it automatically stops the gas flow and switches to a back up system, with no interruption to the manufacturing process. The incorrect gas mixture is vented into a buffer tank using a relief valve mechanism, where it is flushed and the gas is automatically analysed before the mixing process resumes.

As an emergency back up the system holds a supply of correctly mixed gas.